The bike's ready to race on Sunday after a few last minute changes and adjustments. I can't remember if I mentioned it before but I checked, cleaned and reconnected all the electrics behind the headlight cluster to try to cure the shorting problem I had at the Welsh 2 day enduro. I've also had the radiator mounts re-welded recently (thanks ET James), I've just put some new throttle grips on, some new rear wheel bearings and seals and a new chain link clip. Other than that it's just been the usual checks, cleaned the air filter and stuck the numbers on! This year I'm number 208 in the Sportsman class.

Unfortunately I'm having to use the same set of tyres from the Welsh 2 day enduro, not only for the Powys enduro but also for the Beacons 2 day rally the following weekend, which isn't ideal, but there we go, that's racing on a budget for you!

Rain is forecast for Friday onwards so that should make the Powys interesting! As long as I clean the day I'll be in with a chance.
Posted by Unknown at 09:58 No comments:

The RallyMoto club will be putting on a new round this year with the aim of substituting it for the Hafren Rally which has been cancelled. This new ATRC event will be the Tarenig Rally!

From what we know so far it will be a technical course to give riders a good end of season challenge, but whatever it ends up being, I'm sure I'll enjoy being able to race another "home" round and you can be sure I'll be twisting the throttle all the way to the stop on this one! The Tarenig Rally is expected to run on the 28th of September.
Posted by Unknown at 08:31 No comments:

I'm now 3rd in the Rally Lite 2 stroke over 249cc class, having completed 2 out of the 5 rounds so far this year. At the moment that position is fairly secure but I will be wanting to finish at least second in the last 3 rounds if I am going to make any improvements on that! 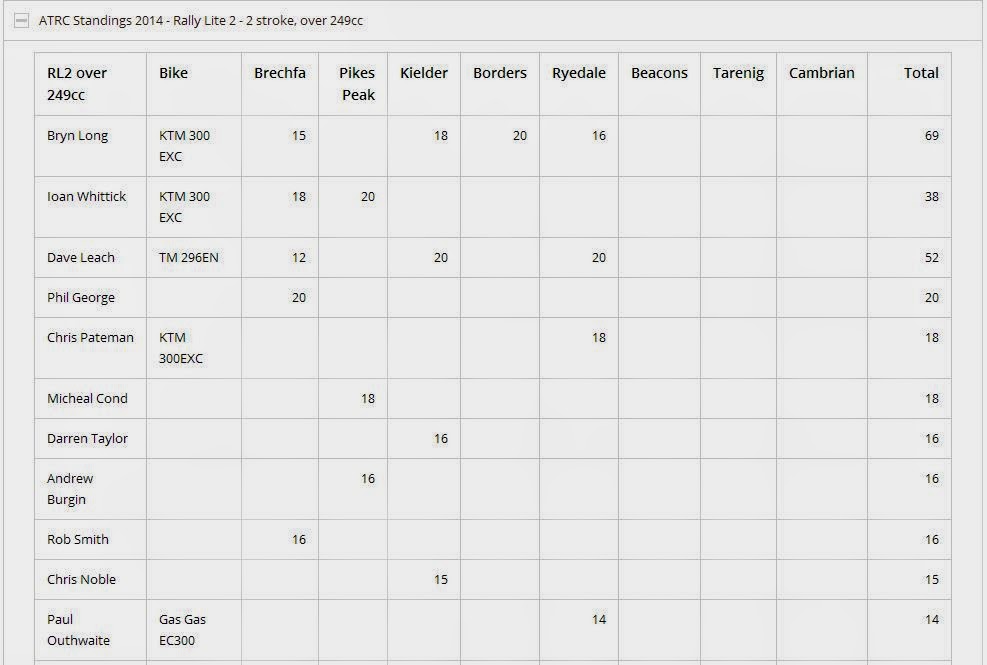 Here we go then, I'm starting my 27th year today! I went out for a fantastic trail ride with some mates last night and really enjoyed it, the bike was fine and I felt good, so things are looking good for the Powys Enduro in just over a weeks' time. What a little treat that was, stunning scenery all around and all kinds of tracks to ride. I spoilt it a little by catching my leg on a rock towards the end, so I'm limping a bit today but hopefully it'll pass quickly.

My goal this year is the same as my race season's goal, and that is to get a class win in an enduro. The Powys is what I consider to be my best chance of the year so far, I know it well having ridden it for the last 5 years or so, but as usual it will come down to the special test times, so I'll have to be fit and ready. The first test will be important as it's normally at the start of the event and that's a good opportunity to gain an advantage if I can push hard and stay on. If it's wet it's anyone's game, but I'll be making sure I don't lose any time on the checks by keeping a good pace. I'm really excited for it now!
Posted by Unknown at 09:19 No comments:

Preparation for the Powys enduro

With less than 3 weeks to go now until the 40th anniversary edition of the MWTRA Powys Enduro, I've been making sure the bike is ready after the Welsh 2 day. The guys at ET James welded my radiator mounting brackets back onto the radiator and persuaded it back into shape. I think I'll look into getting some braces made up for it at some point. The benefits of these oversized rads are lost on me so far (they were on the bike when I bought it)!

Other than that the Wales Air Ambulance EXC is good to go, the tyres are looking a bit second hand after a couple of days at the Welsh but they need to last me the Powys and the Beacons 2 day rally the following weekend!

I'll be riding in the Sportsman again this year at the Powys, looking to break into the top 3 if I can after last year's 5th place.
Posted by Unknown at 09:50 No comments:

I'm hanging onto second place at the moment, but until the ATRC round 5 results from this weekend's Ryedale Rally are in, I won't know what's possible! 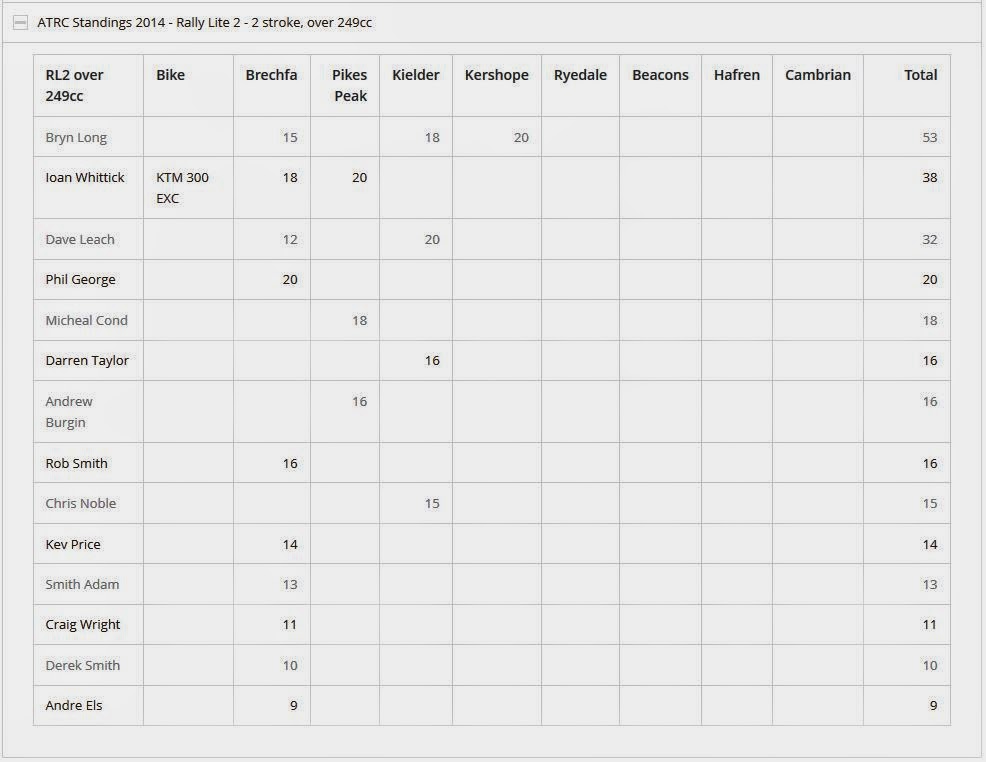 More on board action from the Wales Air Ambulance EXC! This is the Church Farm test from day two, it's a lot slipperier than it looks!

No go for Dawn to Dusk enduro and Hafren Rally

Unfortunately I have had to decide not to take part in the Dawn to Dusk enduro this year. I can't afford it, but I will try to fit it in next year. I'll be there to watch and probably take a few snaps though.

Also, we found out earlier today that this year's Hafren Rally has been cancelled, which is a real shame because it's a fantastic event and many people's favourite - certainly one of mine. That's bad news for me in particular because it means I'll only have 5 ATRC round results to compete against others' 6 rounds, and that's only if a new ATRC round materialises (more on this later when we know what's happening).

Hafren DBC are going to be running a BEC round next year though which is good news, it'll be brilliant I'm sure, so I'll go to watch that, or if I'm feeling mad enough (and they have a sportsman class) I may even have a go!
Posted by Unknown at 13:11 No comments: