I couldn't race at the K2 Rally in Kielder, but a lot of others did, and had a great time doing it. I was at the Caio enduro that weekend, so no points for me! Here's how the class standings look after round three of the 2014 All Terrain Rally Challenge, I'm narrowly holding on to the lead at the moment, but that will change over the next 2 rounds. The full standings can be found here: 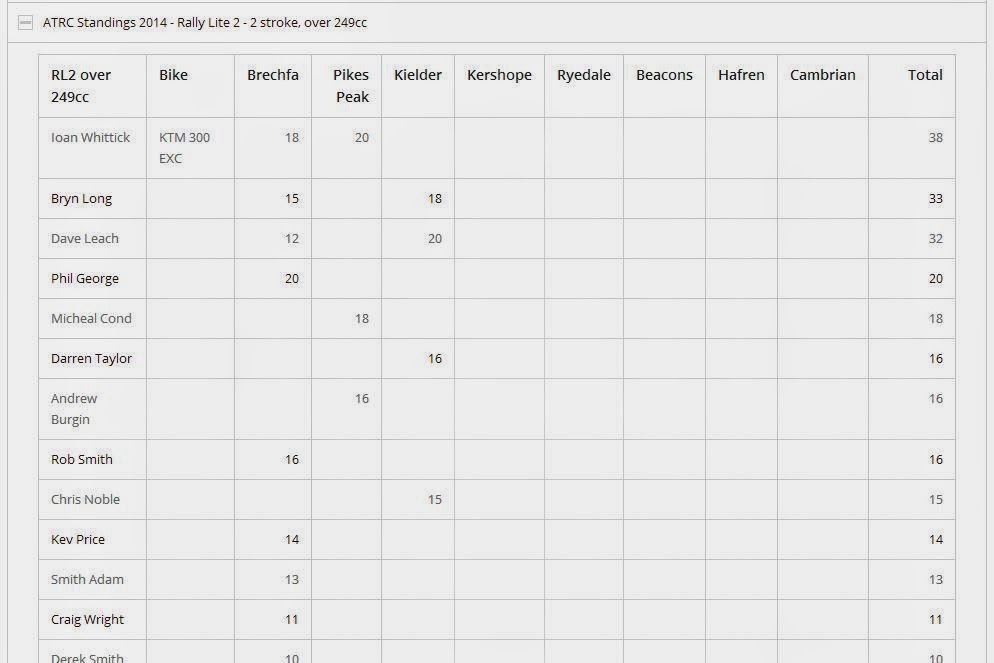 Bike prep for the Welsh 2 day

The next event I have coming up is the biggest of the year, the Welsh 2 day enduro. I need to make sure the bike is spot on, so here's a list of what I'm going to do (other than the usual checks) between now and then, but I'll also need to squeeze in a decent ride to make sure it's OK after all the work:
That last one worries me a bit. Best case scenario it's all in my head, next best thing is a loose engine mount, worst case is a worn main bearing. If that's it, the engine will have to be stripped down and I'll have a top end rebuild done at the same time. If that happens though, there will be a few events coming up that I won't be able to enter and that would be a disaster for me! Fingers and toes crossed for the Wales Air Ambulance EXC...
Posted by Unknown at 13:41 No comments:

I'm happy to have finished 4th in the Sportsman class in the Caio Enduro, it's another step in the right direction in what was a pretty tough enduro with stiff competition!
By my calculations, if the club were giving out sub-class awards, I would have had a Gold medal and Best E3 in the Sportsman.
The full results are out on the Dyfed DBC website. 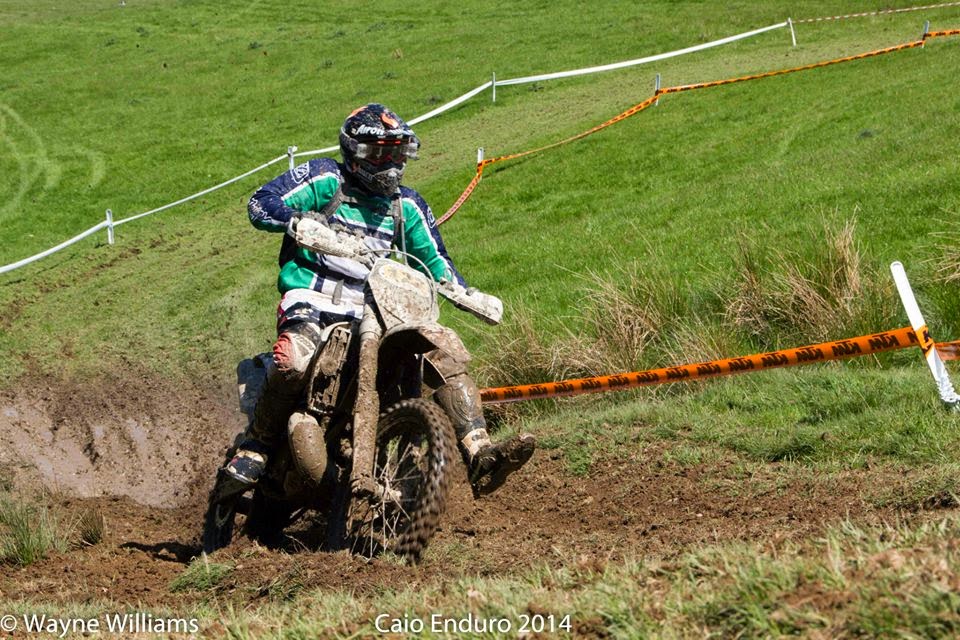 This test was great fun, although it wasn't my finest performance (you'll see what I mean!), here's my first test from Saturday's Arwyn Rees Caio Enduro. The second one was much better (honest), but my camera ran out of battery. I'm really pleased with the new camera, great quality video:

What a fantastic day it was today for the Arwyn Rees Caio Enduro run by Dyfed Dirt Bike Club! The sun was shining all day, the course was great but difficult and the cross country test was sublime.

I couldn't walk the test on Friday, so I decided I'd make an early start and walk it on Saturday morning before the race. I got up at 5am and eventually made my way over to Caio for 8am. I signed on straight away and got my bike scrutineered as soon as possible, then it was straight back to the car and over to the special test.

Walking the test was worth it just for the views from the top of the test, absolutely stunning panoramic views on a day like today. Anyway, I walked it and got back to the paddock by 10am, with plenty of time until my 11:37am start time.

Off I went and the day began badly! Within 10 minutes, my chain had come off, I think it was too tight anyway, but a rock jumped up on a fire road link section and threw it off. I felt and heard something untoward so I pulled the clutch in straight away and coasted to a stop. Yes, sure enough, it was hanging around the swing arm. Damn! I thought this was a sign of things to come but didn't want to let it beat me, I was determined to stay clean on time. Out came the tools, then I realised I had a 13mm spanner, not the 14mm spanner that I needed, so I had to use the big AJ to get at the lock nut for the chain adjuster - wasting valuable time! I spent 7 and a half minutes repairing it and then got going again. The clutch saver did its job, thankfully, althought it took a bit of a battering. Money well spent I'd say!

The red mist descended! There was no way I was going to be late to the first check, I rode like a nutter to make the time up and I arrived at the first check of the day, hot and bothered, with 2 minutes to spare. Yes! I was back in the race. I was under no illusions though, I remembered how hard the course was from last year and the checks got tighter each lap, so I was ready to dig deep.

There were 2 laps for the Sportsman class, both timed by transponder. On the special test, I fell off at the very end of the first timed one, I cleared a log stack, but when the front wheel landed on the other side, it was into a big greasy patch of mud and it slid away from me, which meant I dropped the bike and lost around 10 seconds.

The second test was better, I felt like I was going fast and hitting my lines. There were a lot of good riders there today so we'll have to wait and see what the results are in a few days time.

Thanks to all involved in organising and running the event, I had a blast and will of course be back again next year. Thanks also to Gary Jones the photographer, his official photos can be found here. 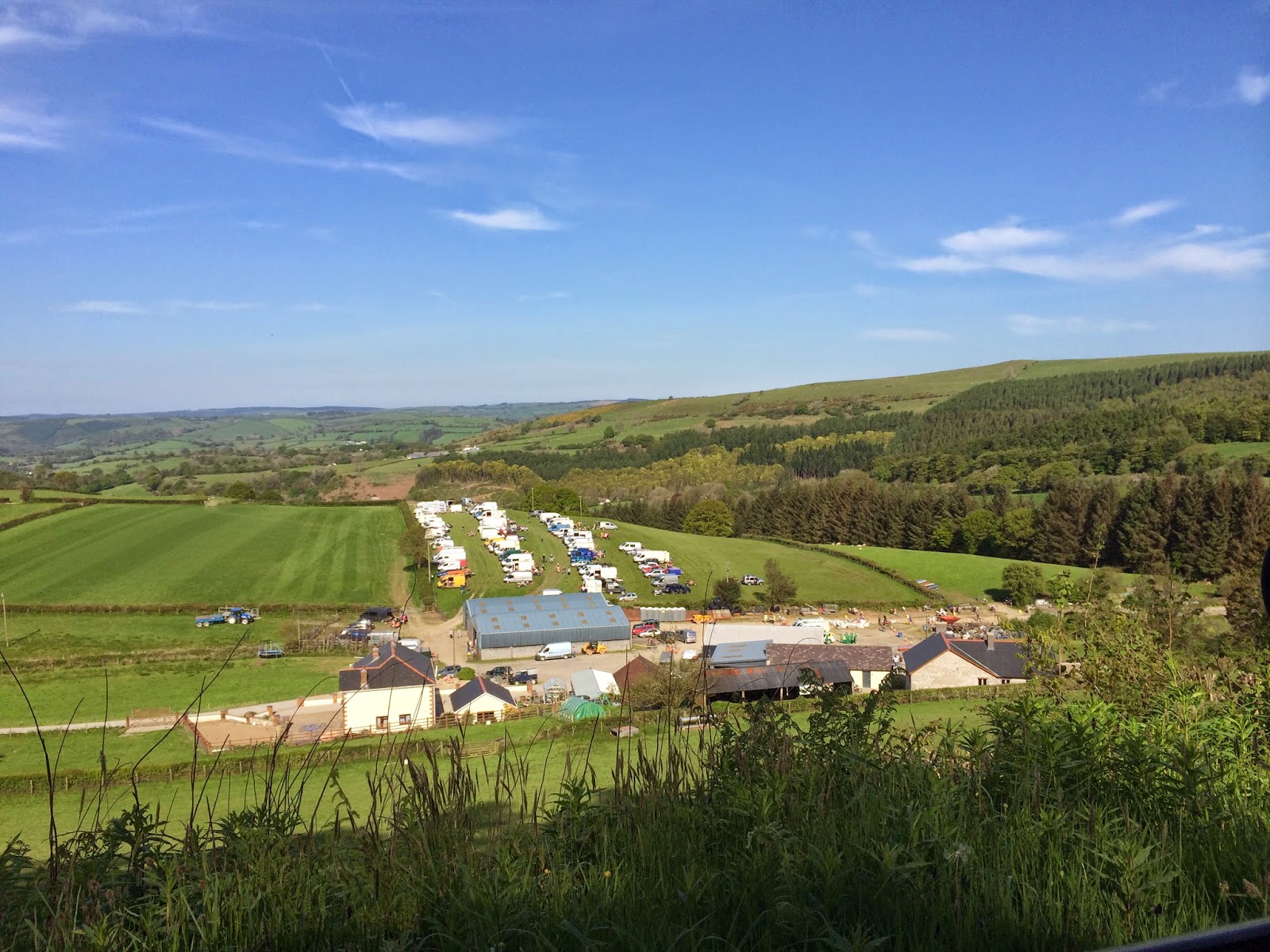 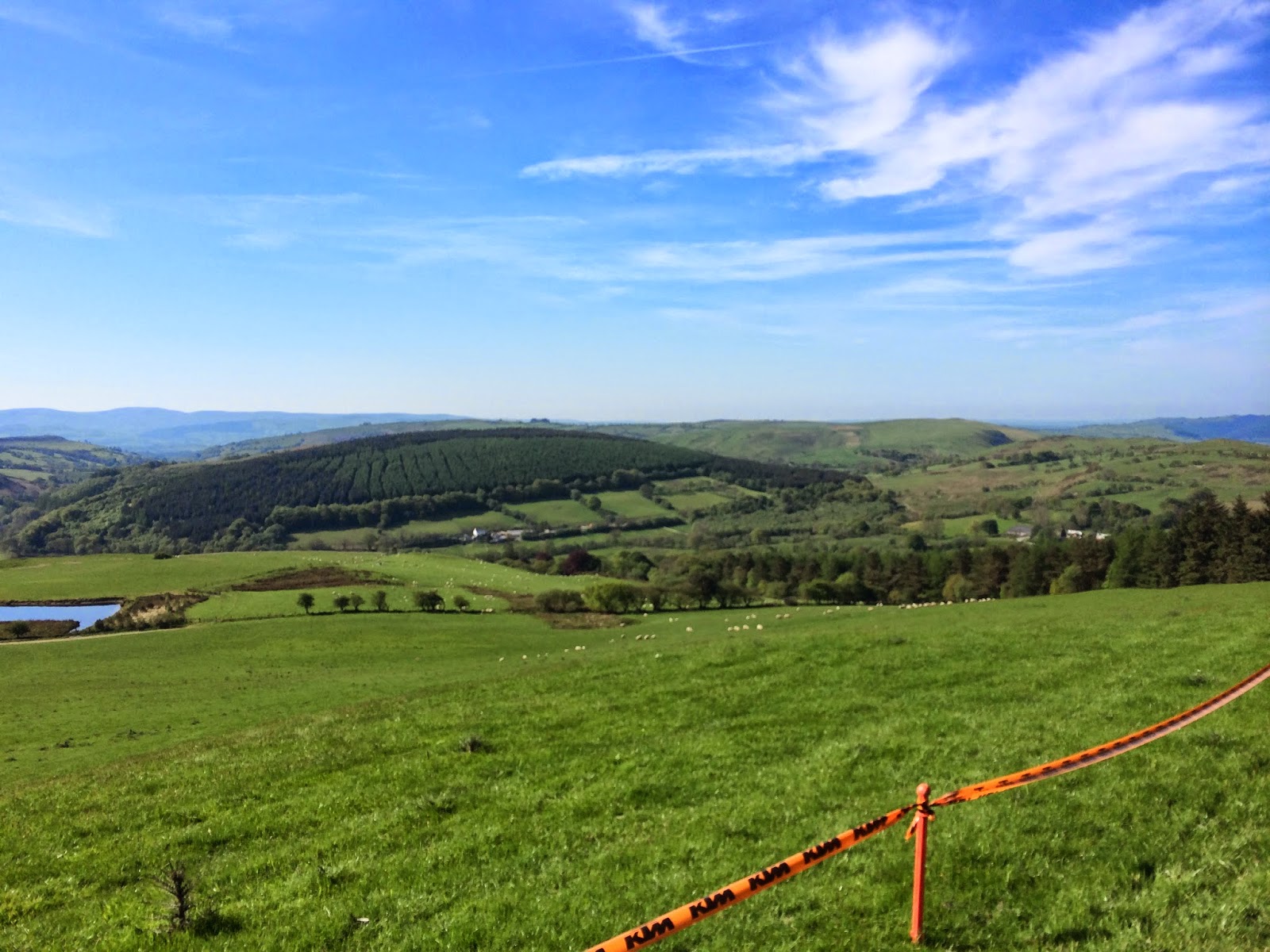 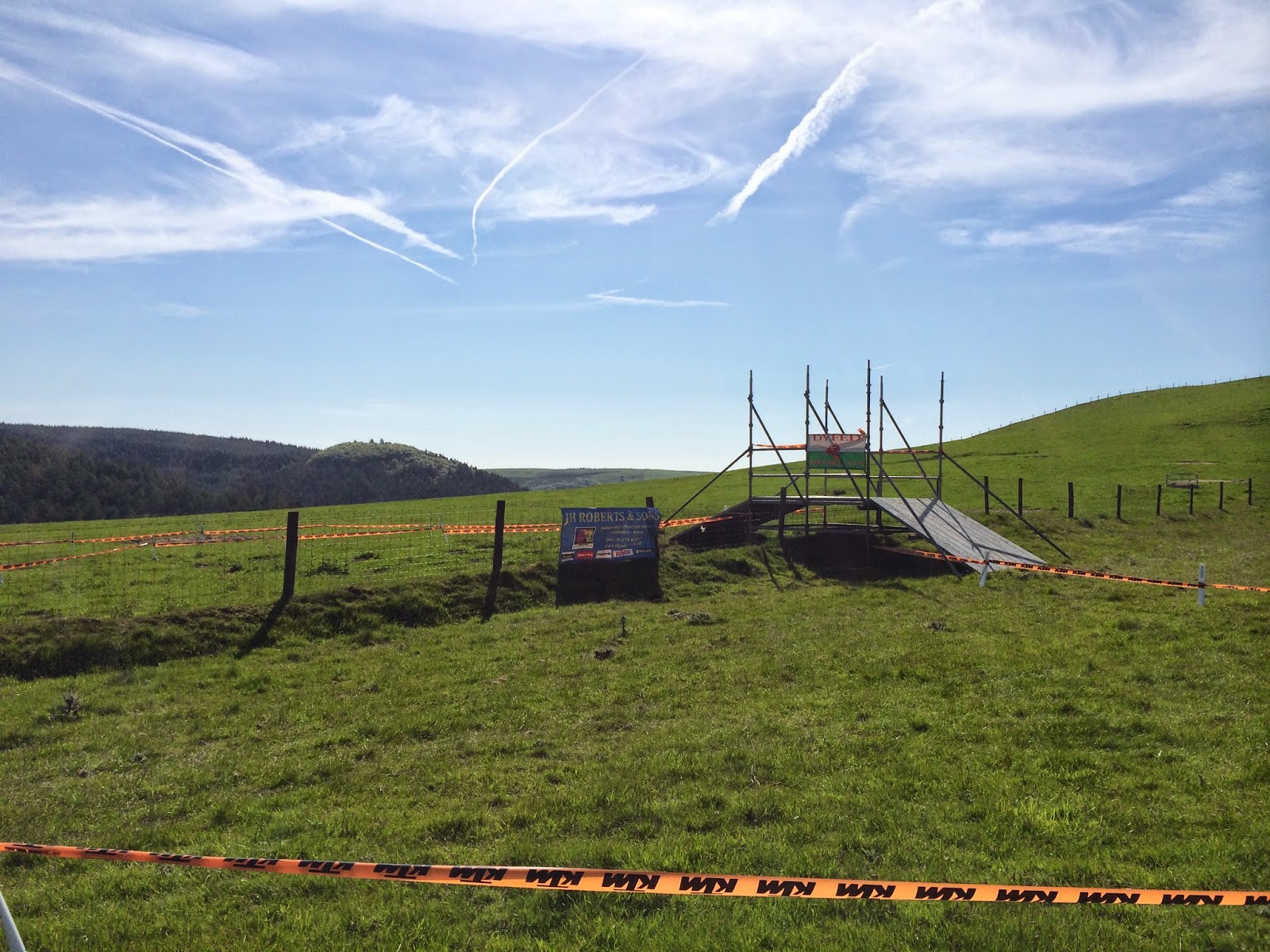 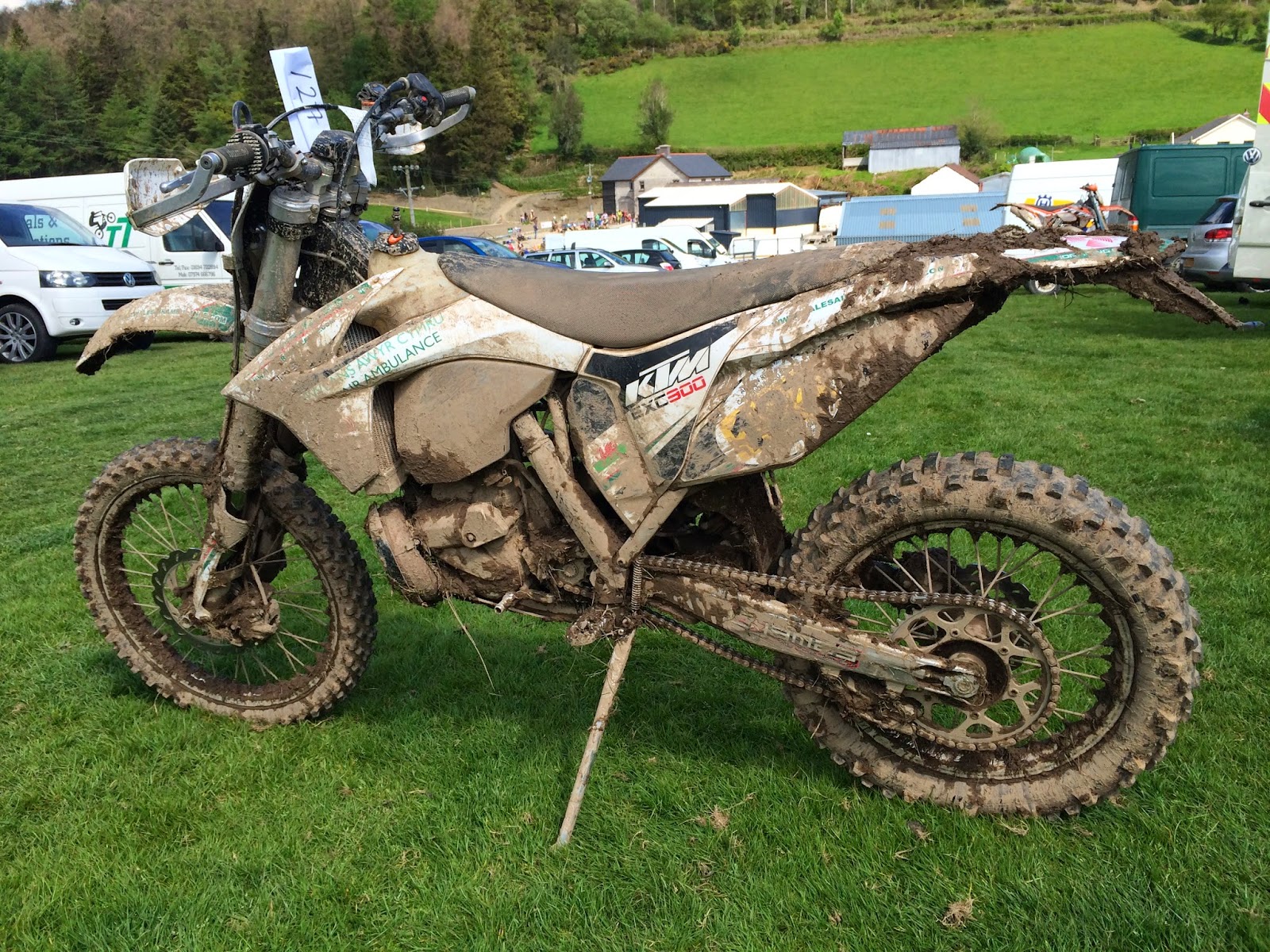 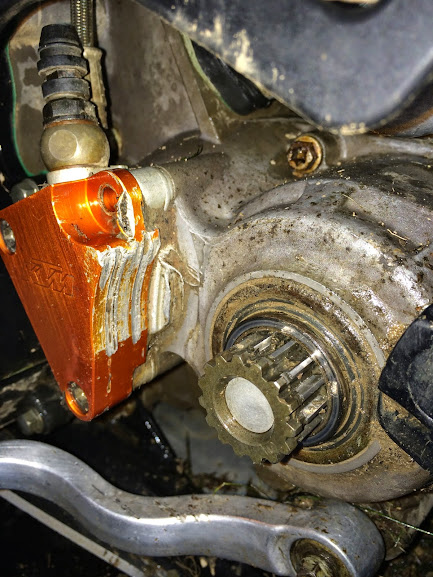 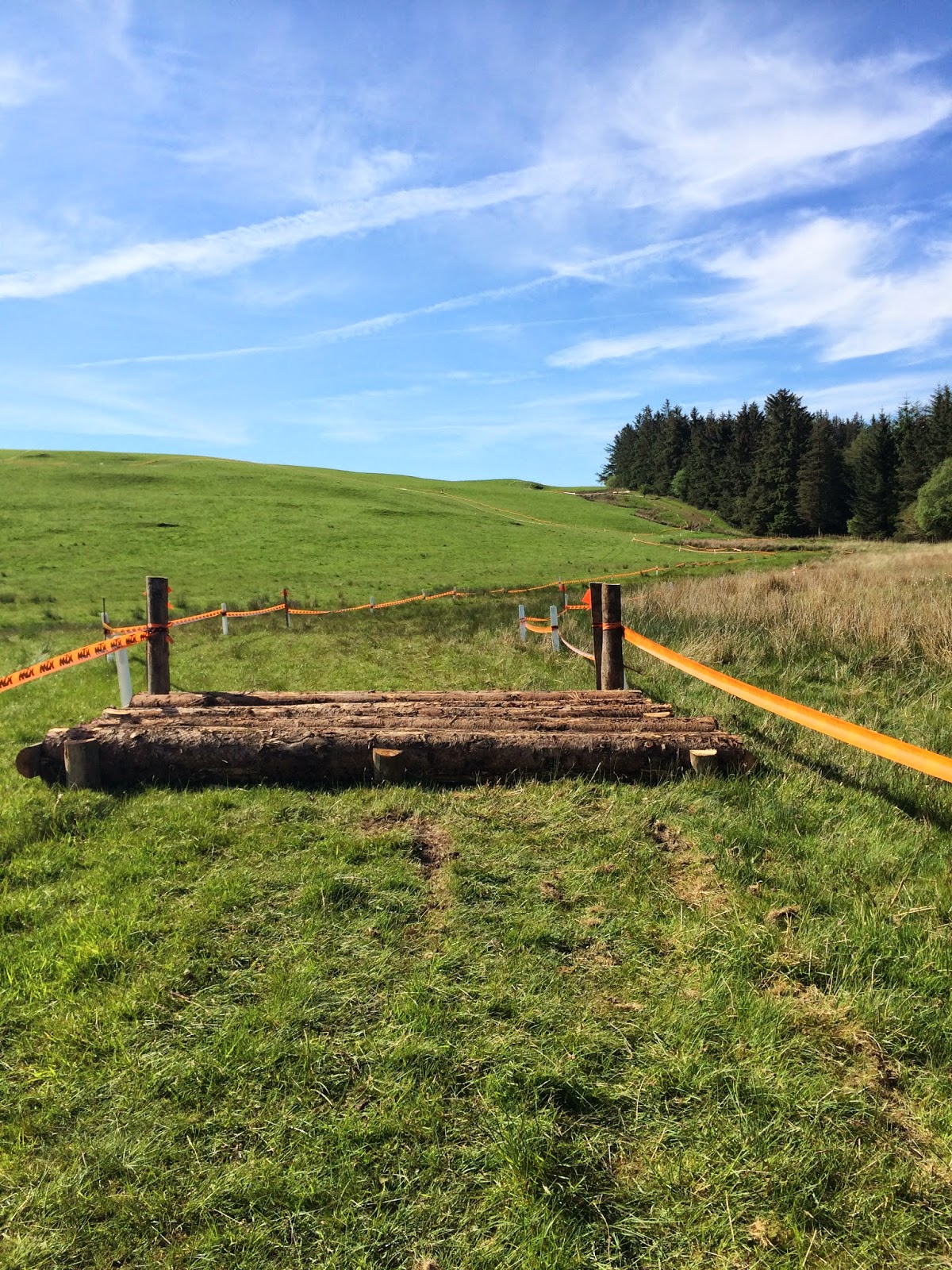 I've finally scraped enough together to replace my tired Contour ROAM helmet camera with a second hand Drift HD Ghost. It came with a remote control and can apparently be controlled by a smartphone app too, so I'm hoping the video and sound quality will be an improvement over my old one.

I will give it a test over the weekend at the Caio Enduro! 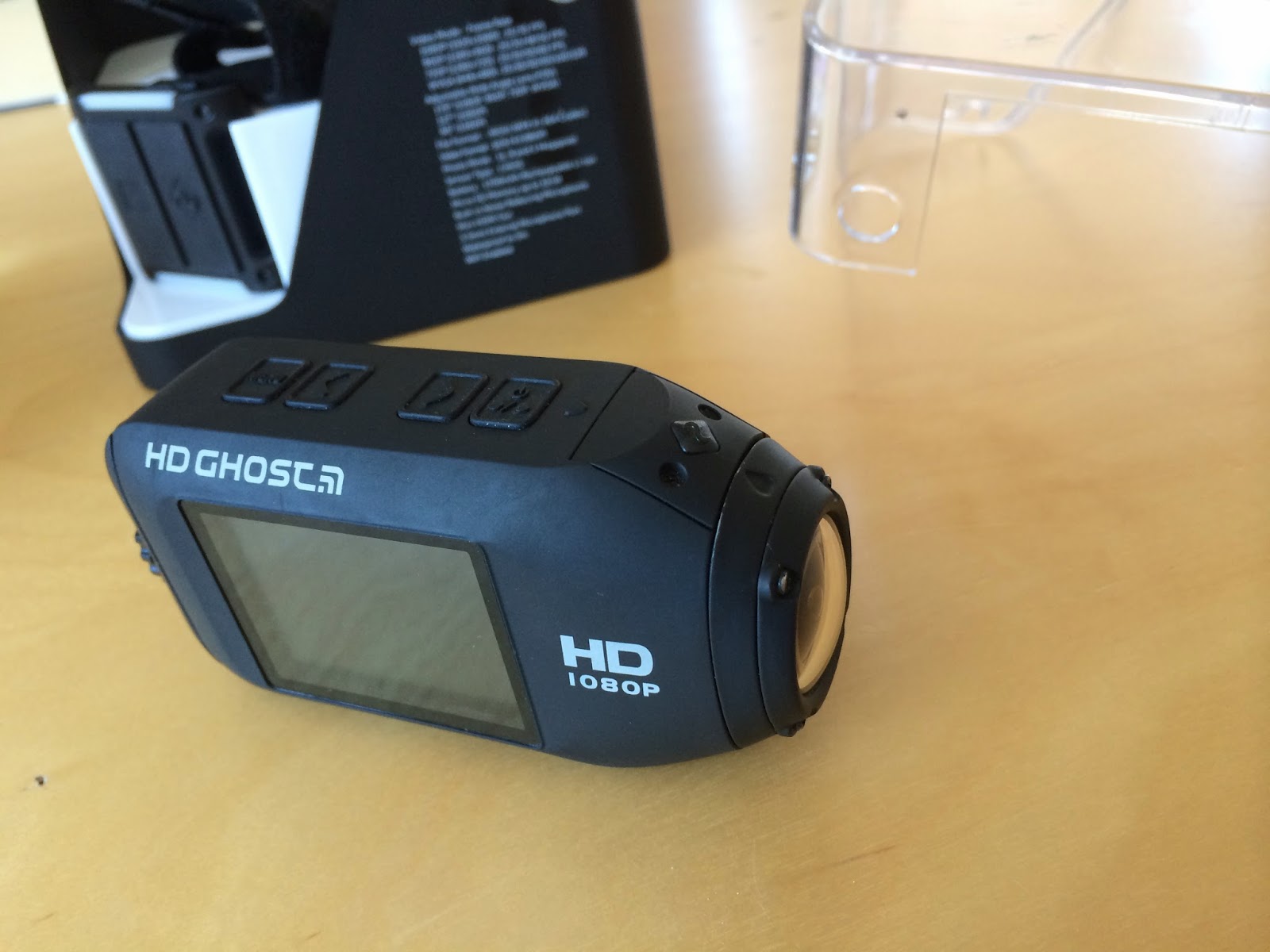 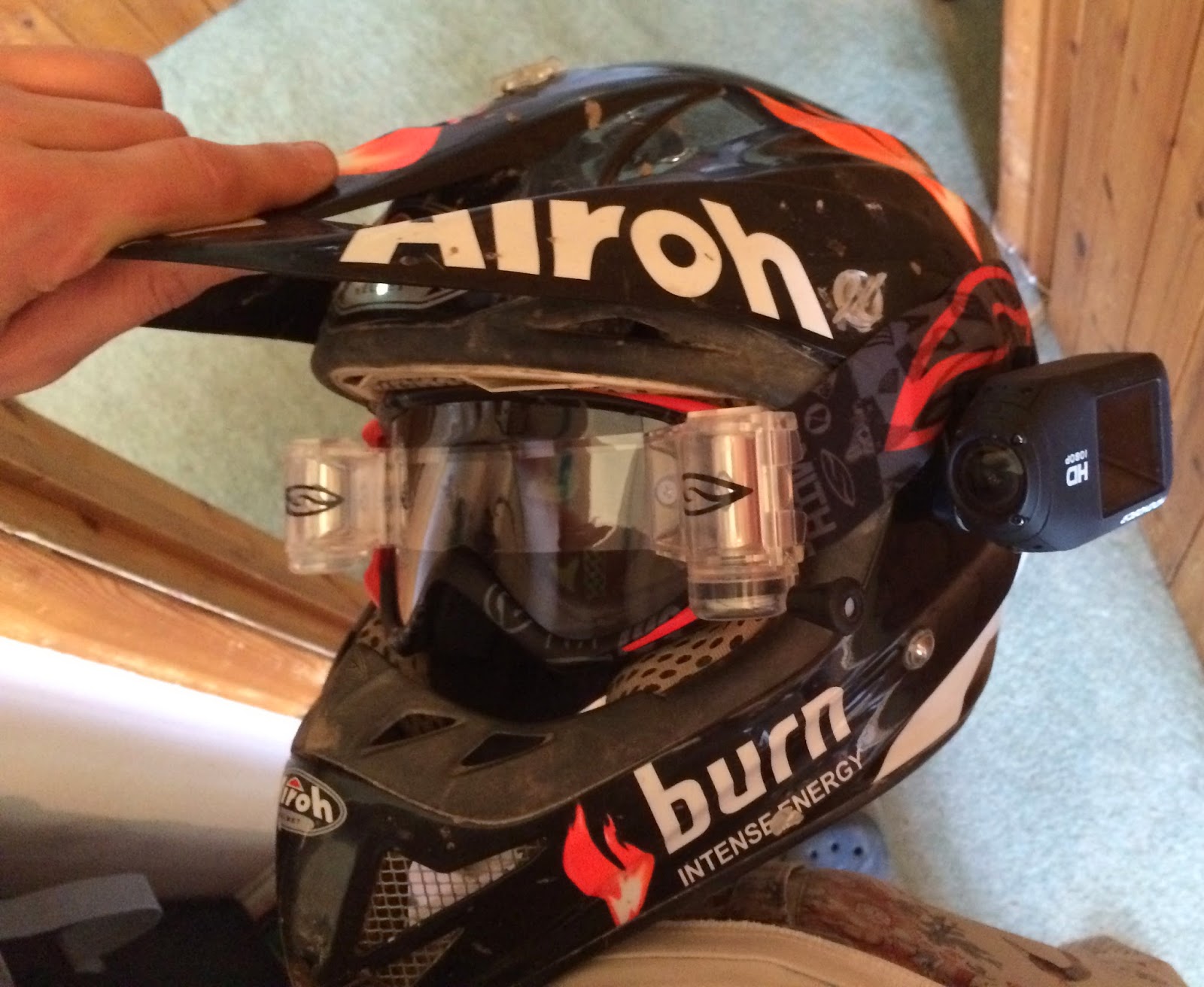 It's exhausting stuff (it's alright, I'm here all week). This might be taking bike prep a step too far, but I'm not keen on the idea of having my bike turned away from scrutineering any time soon! I decided to get a decibel meter and do my own sound testing to make sure my bike isn't too noisy.

Yes, a lot of people would say I'm taking it too seriously but I wouldn't want to be the guy who takes time off work, pays the entry fee, travels to an event, pays for accommodation and then gets turned away on race day. Besides, this bike is still new to me and there are a few things like this where I don't know when they were previously done (if ever).

So there we go, gadget purchased for a tenner off eBay, I set it up on a tripod at exhaust level 2 metres away as per the ACU Handbook and let her rip! The limit is 112db, and mine was too close for comfort, so I've ordered some new packing and will sort it before the next race. My guess is it hasn't been done since it left the factory 100 hours ago.
Posted by Unknown at 10:45 No comments:

I'm delighted with the current standings, at the moment I'm in the lead of the Rally Lite 2T >249cc class in the All Terrain Rally Challenge, but I won't be riding the next 3 rounds due to "budgetary constraints", so who knows what will happen!

One thing's for sure, I will have to fight really hard to get back in the mix later in the season at the Beacons Rally, hopefully I'll be feeling fresh from the Welsh 2 day enduro and on the pace.

The start to the rally season couldn't have gone much better for me, with top 10 overall finishes in both rounds, so I'm really pleased and keen to do even better.

In the meantime, here's how things look after the Pikes Peak Baja Rally, the full points table can be viewed on the ATRC webite: 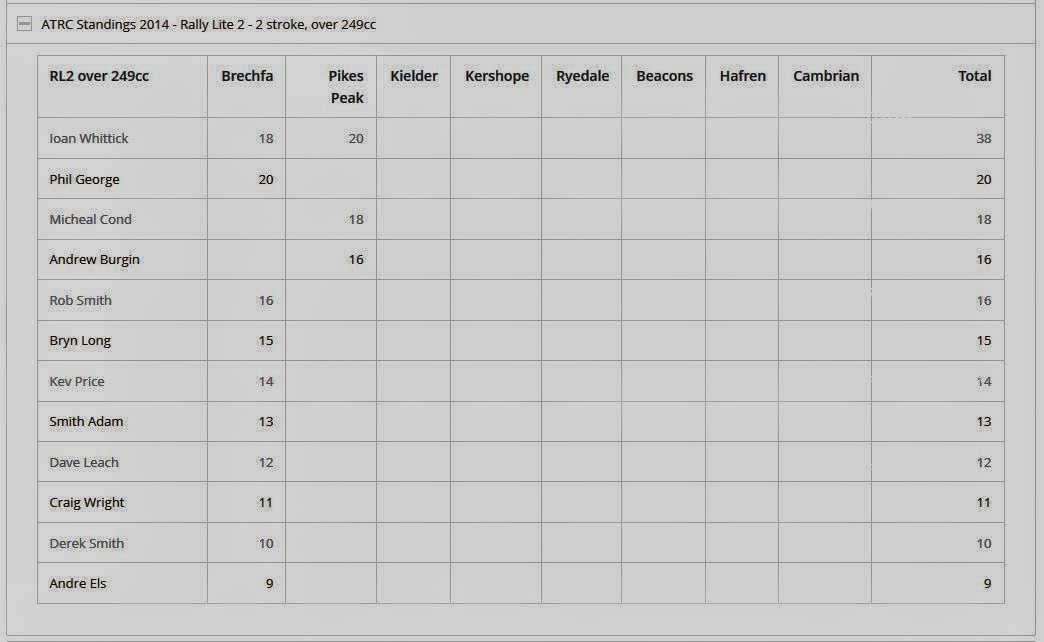 Practicing over the weekend for all the up-coming enduros!

There was some fantastic coverage of the Pikes Peak Baja Rally from the S4C Ralïo+ crew, thank you very much everyone, and it was great to talk to Emyr Penlan and Lowri Morgan, they're lovely people!

It was very exciting and a bit odd for me to see myself staring back from the television, but brilliant exposure for Wales Air Ambulance. What's more, I will be able to remember my "debut appearance" on Ralïo+ even easier, thanks to it being my first ever class win, in the Rally Lite 2 stroke > 249cc class. Happy days, diolch!

The full episode can be watched on S4C Clic. 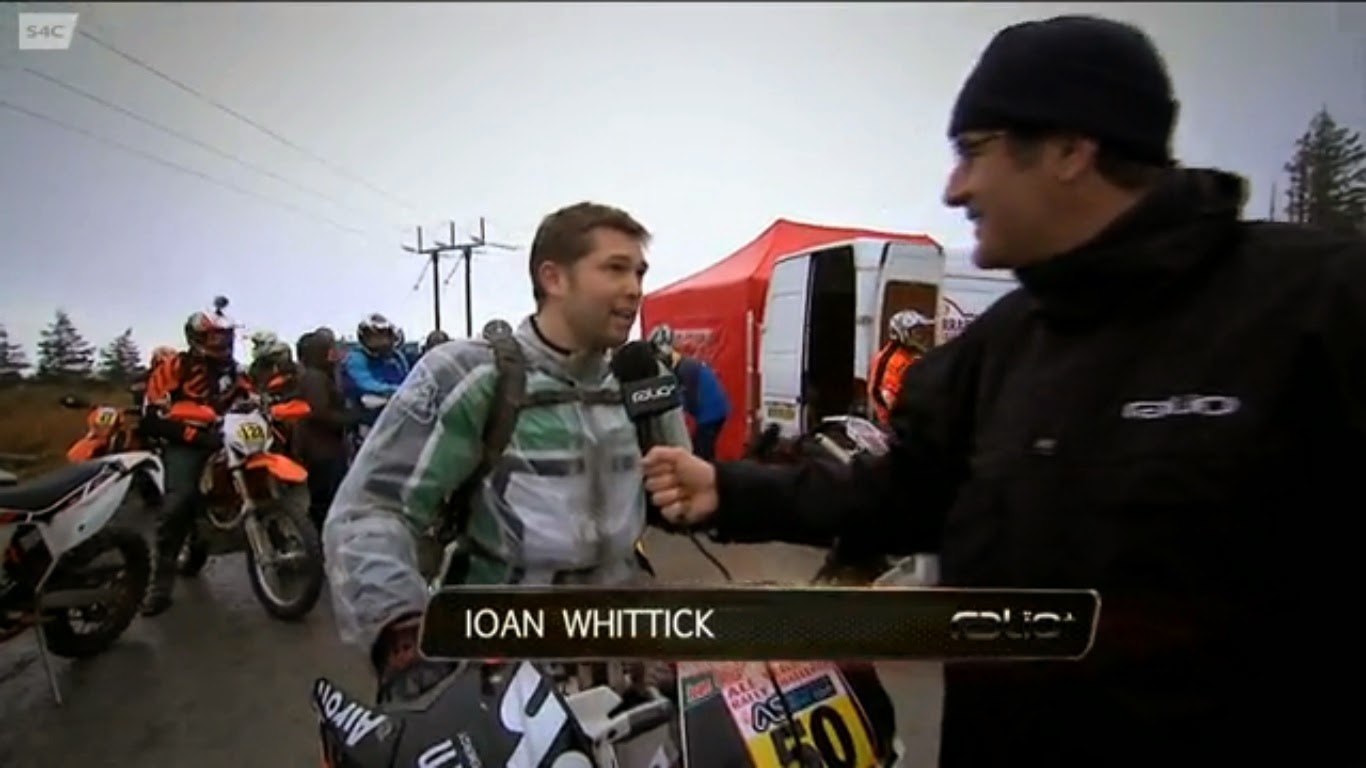 The rest of the lap after the special test, great course set out by the RallyMoto club!