My weekend of bike related antics started on Friday night, I took a beer with me and set about preparing the bike for my first ever "proper" roadbook practice session. I marked up my roadbook with all sorts of highlighting - I tried to work out a basic system beforehand, but I realised after going out riding that it needs simplifying. More on that later...

I got up at 7am on Saturday morning and looked out of the window to see a nice blanket of snow on the ground! I have to say I wasn't best pleased, every time I've been out training this year it's snowed or been icy, and in fact, it was at the Snowrun enduro too. Don't get me wrong, it's masses of fun riding on snow, but it's not what I wanted from the day's riding. Anyway, off I went at 8:30am with a huge smile on my face! I hit the first trail (which is proper enduro going) and although it felt a bit odd not seeing the front wheel, I actually found I was hitting things with confidence, a nice feeling.

I loved the roadbook setup, it worked really well and it was exactly how I wanted it. I had some issues reading it on the tight, technical trails but I need to learn to memorise the next few instructions - that'll come with experience.

The roadbook loop I'd prepared for myself (not ideal as a concept but that's all I could do) was a total of 80km. Everything was going swimmingly until at 45km the bike died on a road section. I thought I'd run out of fuel somehow, but I hadn't. I switched onto reserve just in case and tried a couple of things. Eventually she fired up and I got going again for another 7km, then it died again! 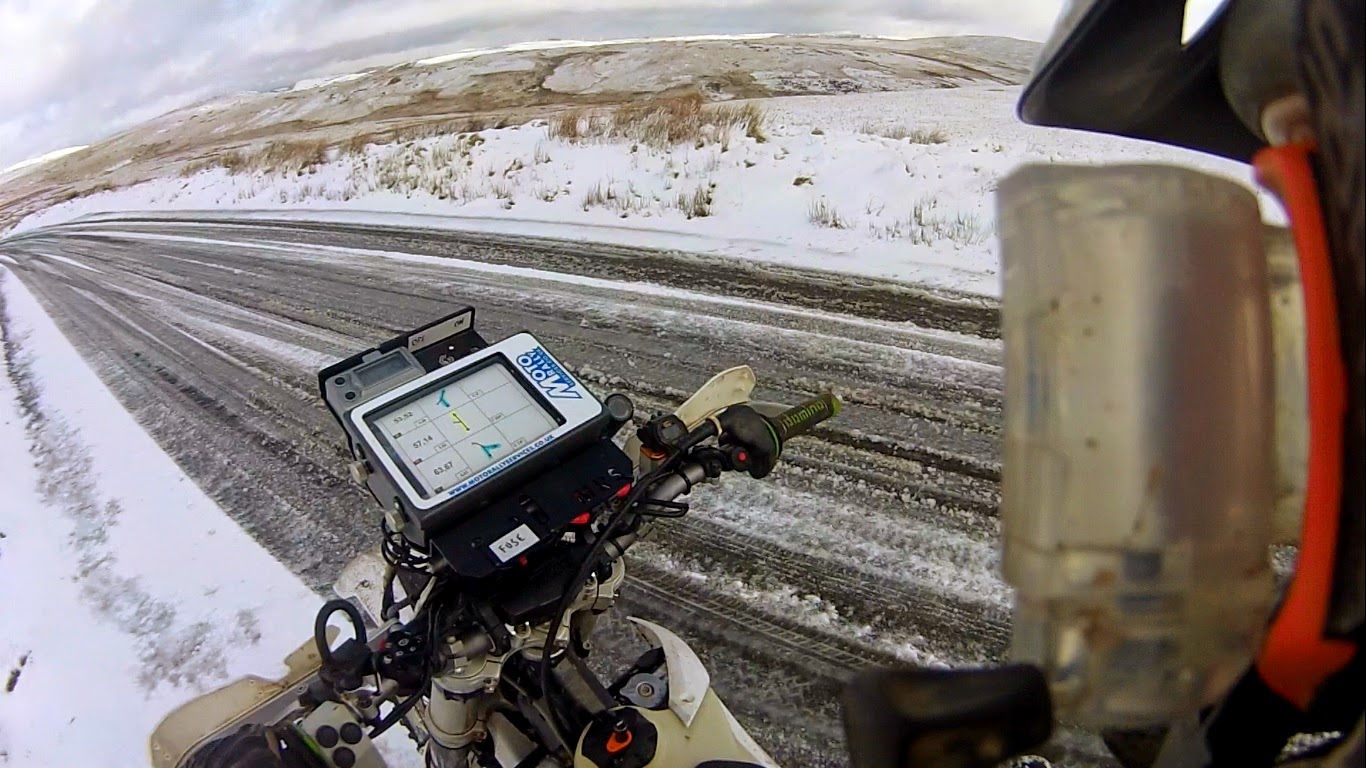 Not a bad place to break down! Sort of...

It was a pretty nice place to break down to be fair - right on top of the mountain road, with great views of the snow all around. I got off the bike and set about trying to get it started again. Then two great chaps who were out trail riding came over to check I was ok. I didn't get their names but they were really friendly and stayed with me to try to help me get going again. Thanks very much, it's always great to experience camaraderie between riders, whether it's during a race or out on the trails.

I switched spark plugs, checked all the electrical connections, checked for a spark, and checked fuel was getting through. By that point I was pretty sure it was some dirt in the fuel that had blocked one of the jets in the carburettor. I gave the carb a few firm taps to try to free any dirt and then gave it a good solid kick and it started up again! I thanked the guys and set off to complete the remaining roadbook loop, having wasted about 20 minutes. I got back fine after that and had some fun on a couple of tricky trails along the way.

As far as the roadbook/navigation setup is concerned, I just need to tighten the bar mount for the roadbook holder so that it doesn't swivel quite so easily (at the moment it's loose enough to move if my head hits it), but it did move when I wheelied over a huge puddle and brought the front down hard. So a little bit tighter to stop that happening will be just the job. Other than that, it was spot on! I will flush the carburettor before the next race, just to minimise the chances of fueling problems happening again. I'm very careful with filtering my fuel, but occasionally some dirt gets in.

I'm feeling better about Pikes Peak now, although I'm still apprehensive about roadbook riding at speed off-road. I just haven't had that experience yet, but I'm hoping I'll be able to cope well when the time comes!
Posted by Unknown at 10:09