The morning of round two of the 2014 All Terrain Rally Challenge started with dense fog, some light rain and a chill in the air. I wandered over for 8am and quickly signed on before getting my bike scrutineered and having a transponder fitted. This meant our special test times would be timed automatically using radio signals accurate to thousandths of a second!

The rally was a sprint format, which meant the fastest lap you can muster on the day is the one that counts, but you need to finish all the allocated laps in order to be classified in the results. RallyMoto club (the organisers) had also introduced a fantastic roadbook section this year for the rally class. This was a huge amount of work for them, but all the feedback has been positive and I for one am very excited to see roadbook rallies taking off in the UK, so well done everyone involved.

Those of you "in the know" can skip this bit! A roadbook is effectively a list of navigation instructions which is printed onto a roll of paper. That roll of paper is then (usually) fed into an electronic roadbook reader, which is a motorised scroller. The rider will typically have switches mounted on the handlebars to control the movement of the roadbook as they are moving along. They also have odometers (often referred to as ICOs) which are used to calculate the distance travelled. This is important because the instructions in the roadbook relate to very specific distances. The beauty of a roadbook course is that there is no traditional course marking with arrows, you use your navigation and riding skills to get you to the finish, and there are normally "waypoints" along the way which must be collected, if not, the rider is penalised. Waypoints are generally used in large international rallies making use of GPS, but there can be manned hidden checkpoints to fill this role.

We set off slightly later than planned but all was fine with the schedule because the lap times were generous. I was due to start at 9:21am and complete 7 laps of the 25 mile course (60 minutes each), the first lap an untimed sighting lap, the others all timed. The course had a good variety of trails including steep climbs and descents, ruts and sticky mud as well as the usual fast fire roads, so there was something for everyone. The special test was fast, with two notable technical sections; a downhill grassy bank with sloppy, muddy ruts which was around half way through, then a rocky stream-bed-type climb at the end - great fun. There were two bits of the test where I had the bike absolutely flat out, which was brilliant fun, but at the back of my mind I was feeling sorry for my poor little bike. I tried as best I could to treat her gently on the rest of the course. Kev Price wasn't so lucky on his new-ish Beta, having to retire due to a leaking head gasket on the second lap, bad luck mate.

On the sighting lap, I could see the level of grip on the test would drop throughout the day as the surface got polished, so I rode at good pace to get comfortable ready for the first timed lap. I dropped the bike in the sloppy ruts but that was the only time I was separated from my bike! The weather improved as the day wore on, the test got predictably slippery in places, but I learnt where to keep the power on and which lines were fast, so all in all, I have no idea which lap was fastest!? I caught a few riders on the tests too, which might have cost a few seconds here an there, but that was unavoidable and the same for everyone. I had a good clear run as I stealthily and tactically snuck onto the test behind Craig Bounds, so that may well have been my best lap, we shall see.

The club made the sensible decision to cut the last lap due to the condition of the course. It had, after all, been used the week before for a car rally. We still had 6 laps though and that was great as far as I'm concerned, I felt good at the end of the day, despite being shaken around by the rough, rocky going and getting a stone in the mouth from a 525 rock thrower!

Another treat on the day was that S4C's Ralïo+ crew were filming and they seemed to like what I'm doing with the bike, so fingers crossed there will be a mention! Either way it was great to meet them, what a friendly bunch.

One more thing that we crammed into the busy day was to setup the Wales Air Ambulance fundraising stand I put together. Thanks to the RallyMoto guys for letting me set it up under their much bigger stand, out of the wind and rain. Most importantly though, thank you to everyone who donated, bought badges and gave their support in other ways throughout the day.

I saw a lot of familiar, friendly faces yesterday which was great and met some new ones too. Thanks very much to everyone who was involved in organising, running and marshalling the event, I had a lot of fun and so did everyone I spoke to!

Gary Jones the photographer was in attendance once again and got some brilliant photos, available here: http://garyphotos.zenfolio.com/p13458085. 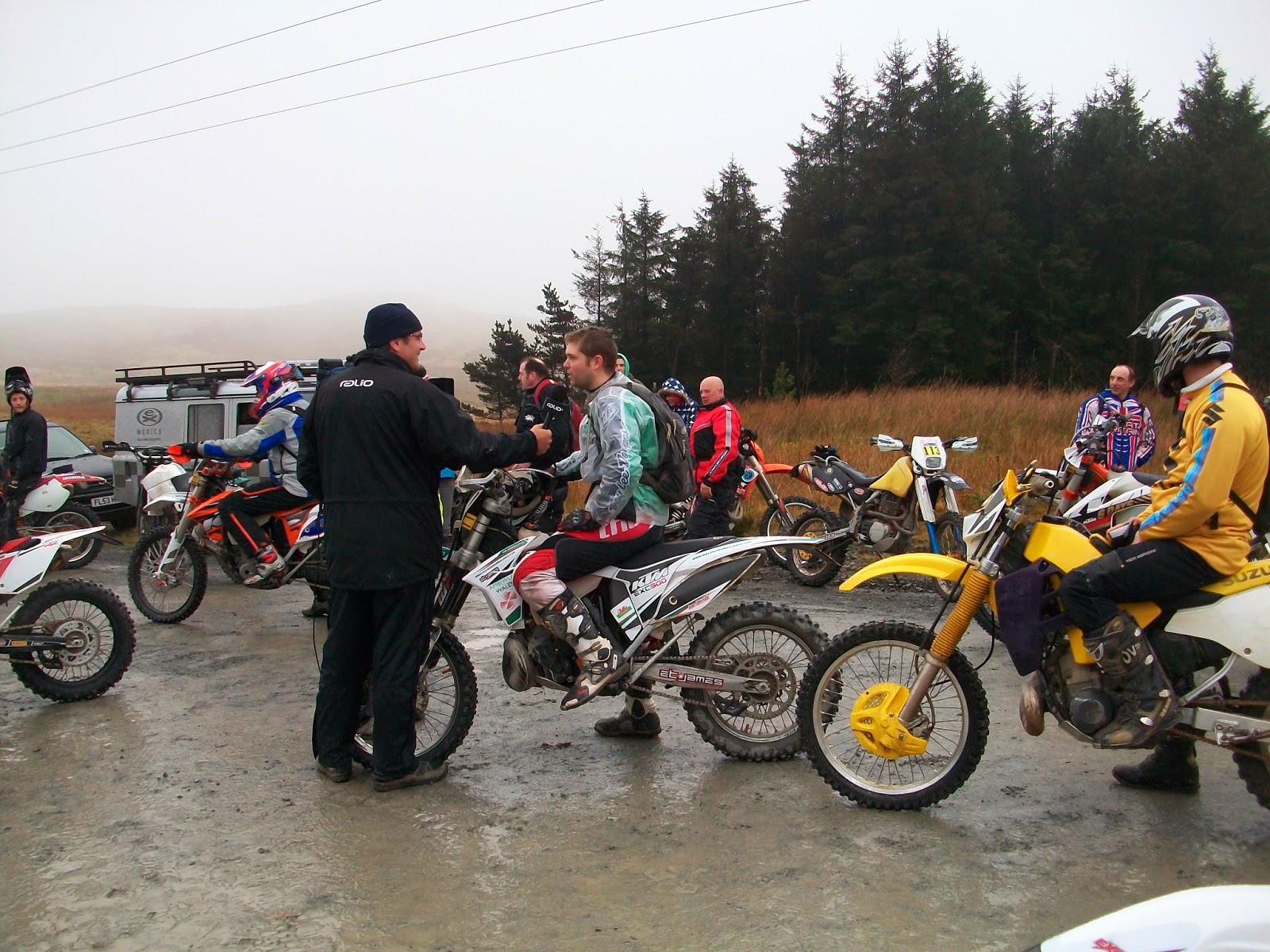 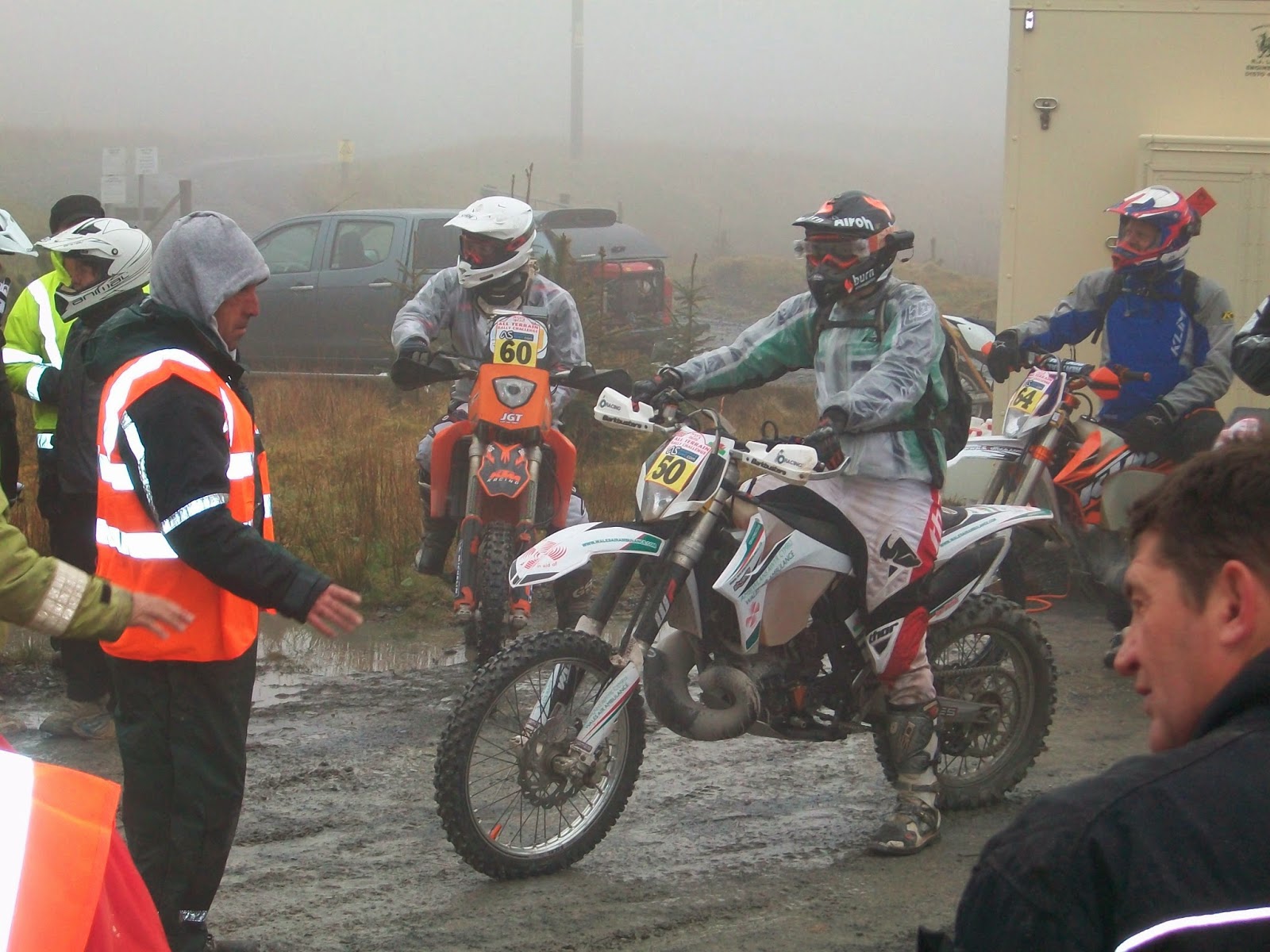 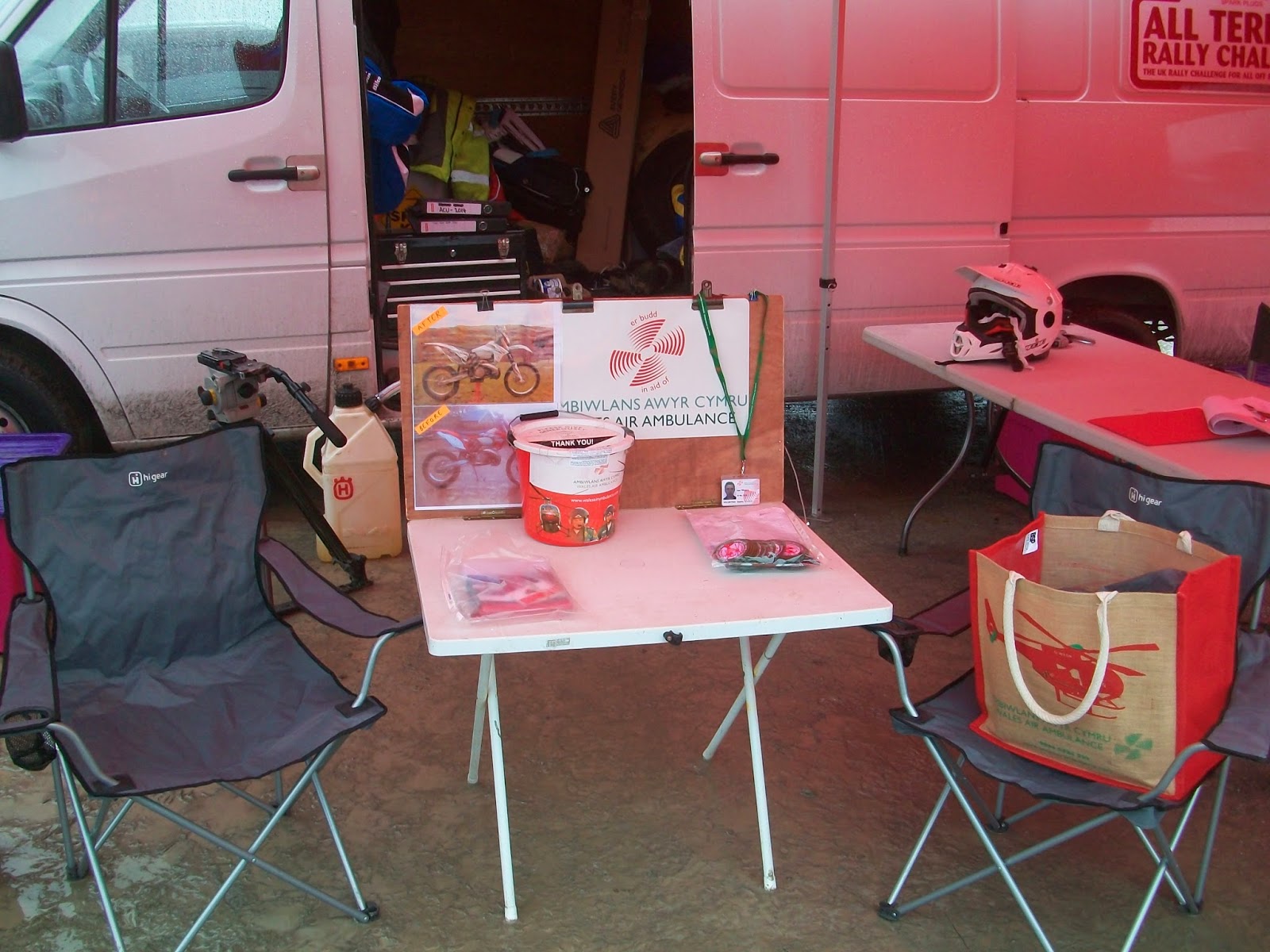 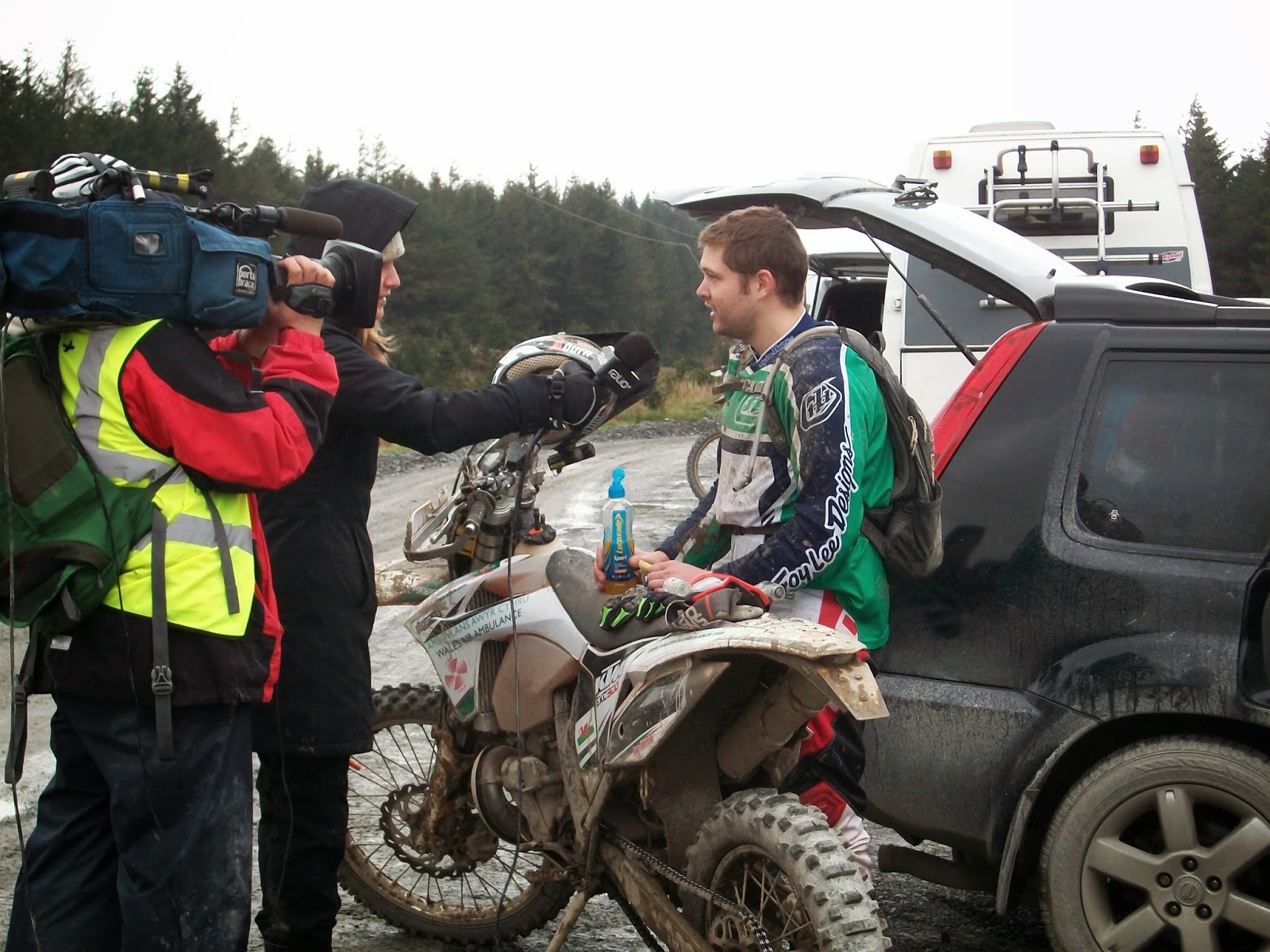 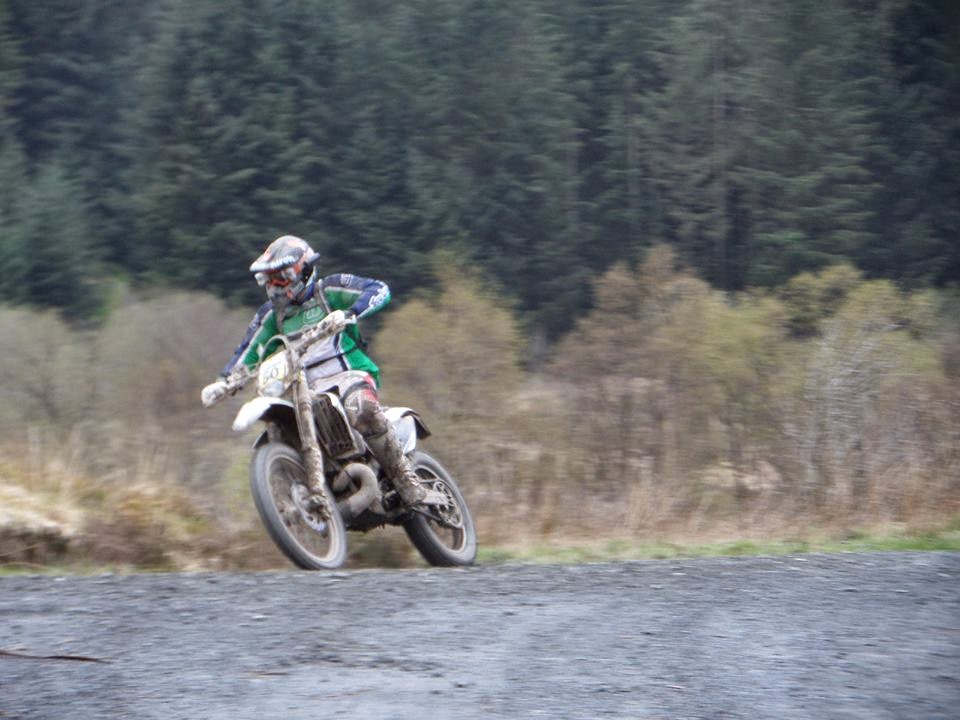 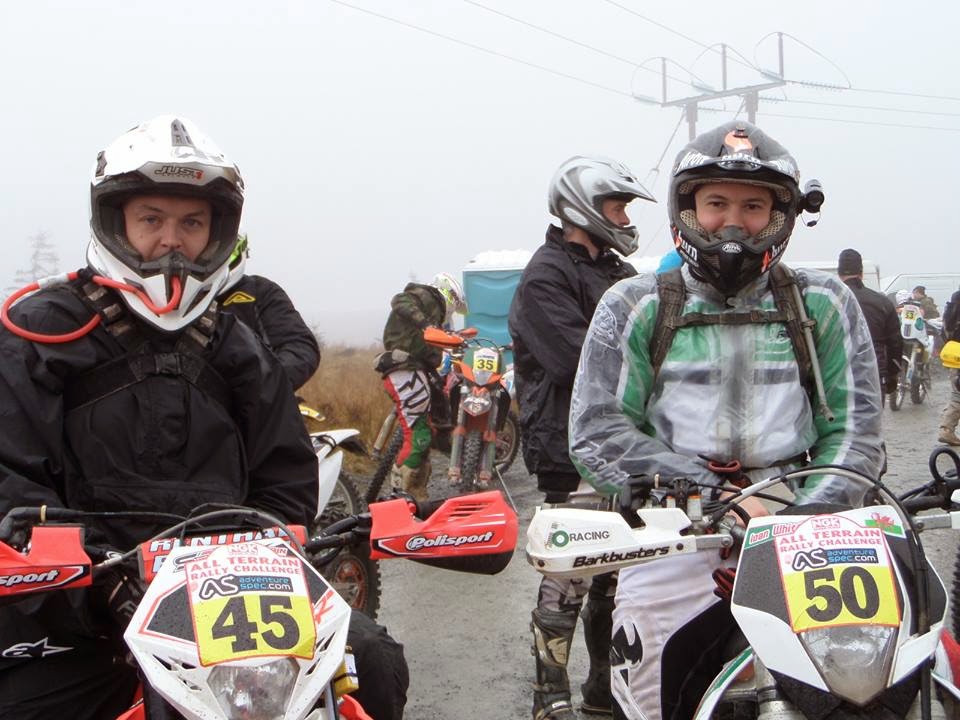