We couldn't have asked for better weather for the weekend, as I drove up to walk the test on Saturday morning, the Nant y Moch reservoir was still as could be and gave a magnificent reflection of the stunning scenery around it. The ADMCC club were hard at work when I got there, making final preparations for Sunday. It was an excellent, challenging and long cross-country special test, with a lot of technical sections, a "proper" enduro test if you will!

Sunday morning arrived and up I got at 6am. The weather was already looking stunning so it was going to be a good day out on the bike. I arrived with plenty of time, had a chat with a few riders and club members and then signed on, got my times and numbers and then had my bike scrutineered. Unfortunately (not only for the club), there was a low number of entries for the event, but that makes me all the more grateful to ADMCC for putting the event on regardless, it was great fun.

With a start time of 10:05am, I had 3 laps to do with each one set to take 80 minutes, 75 minutes and 70 minutes respectively. The special test was at the start of the lap and the first lap was un-timed. Let me tell you though, I was glad I made the effort to walk it! The course was great, there was a good mix including a lot of technical forestry going with tree roots and deep mud to negotiate.

I had two good timed tests, staying on the bike and going fairly steady and I stayed on time until the last check of the day. There was a deep muddy rutted section in the woods out on the second check, and I tried (and failed) to switch lines earlier in the rut, so I went for the tree roots on the outside and wedged the bike in a deep rut. The pegs were caught and not even a lifting it onto the back wheel could move it, the bike was just digging a hole - it was so soft! I was sinking into the mud as I tried to lift it out, back wheel first, then front wheel, then I had to lay it down to drag it across. What I hadn't realised though was that the rut on the other side was so deep. I had to stand in it to push the bike up but it was half way up my legs and I was pushing away from me! I had to ask a passing rider for help - I think it was Paul Jones, so thanks very much. He helped me lift it up and then he carried on. Back on two wheels I tried the next line over but ended up digging another hole, it was ridiculously soft in there. I had no choice but to drag the bike out into the deeper lower rut I was stood in but the bike had been sucked in and was hard to shift with my being lower than the bike itself. Luckily, top man Dafydd Morgan stopped to help me drag it out and down into the lower rut (diolch yn fawr, ti'n seren)! All in all that physically exhausting mistake took me 7 minutes to rectify.

I carried on and dropped out onto the fire road feeling cramp setting into my thighs and abs! This was the last section of the day - a few miles of it back to the finish. After a mile or so I checked the clock and my time due in at the check. I knew the clock was fast by 2 minutes and I was due in at 13:50. As I looked down, I saw the watch tick onto 13:48 and all the alarm bells went off! Down came the red mist and I rode flat out to the end of the check, I know at one point I had the bike flat out in top gear so I was really moving. I slid around the last corner and shouted "TIME?!" as I got there and heard "51" as the reply. I was gutted! I moved past the flag and handed my timecard in, but that was really hard to take after I'd ridden so well all day long!

So a bit of a disappointing end to what was a brilliant but hard event, now it's a case of waiting for the results and hoping for the best!

I'd like to say thanks again to the ADMCC club for putting the event on and all the effort that's gone into it, all the marshalls and officials and to Paul and Dafydd who were kind enough to help me, I hope I can return the favour at some point lads. Thanks also to Keith Bowen from MX247 and Sion Edwards for taking photos during the event. 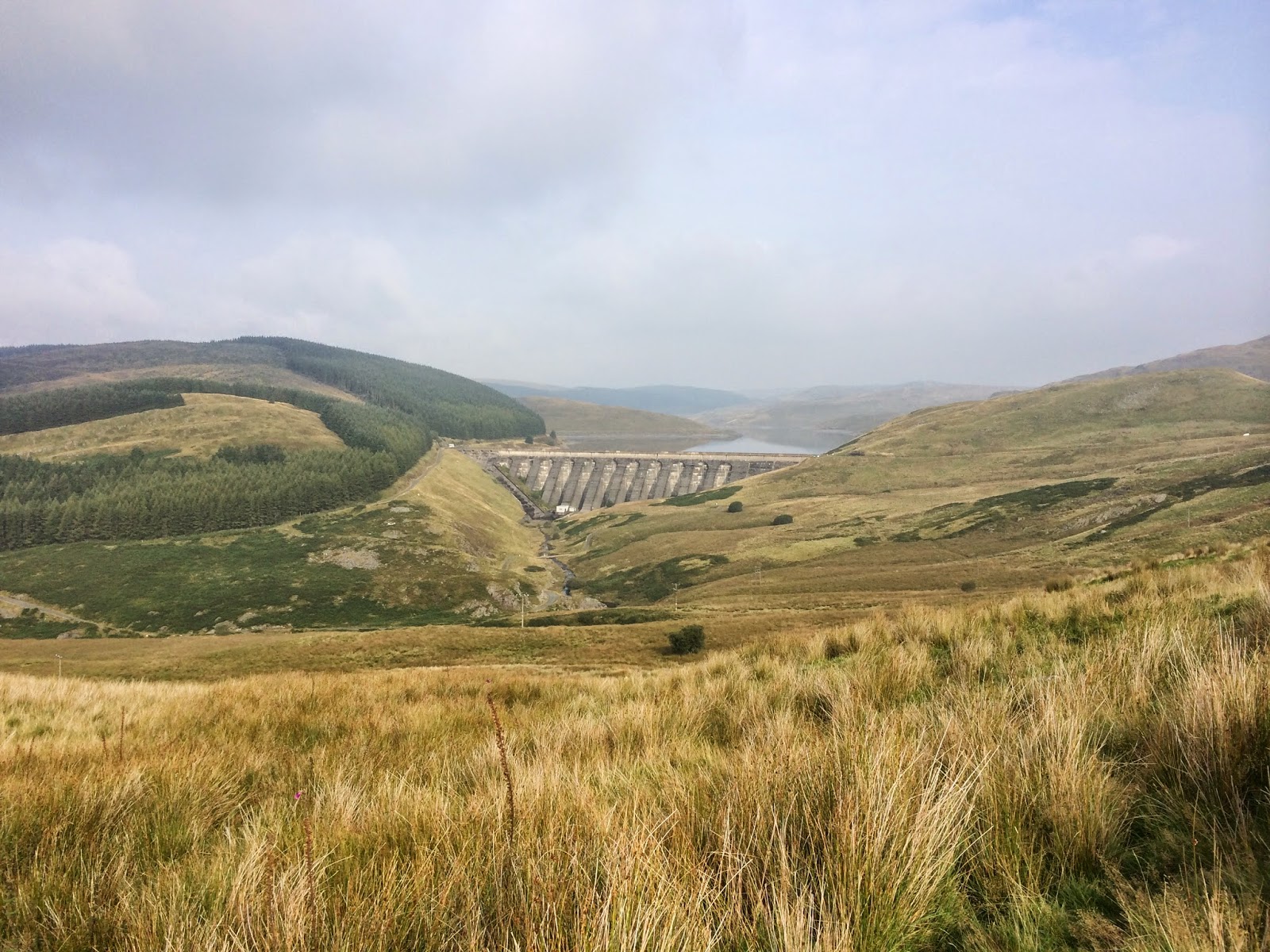 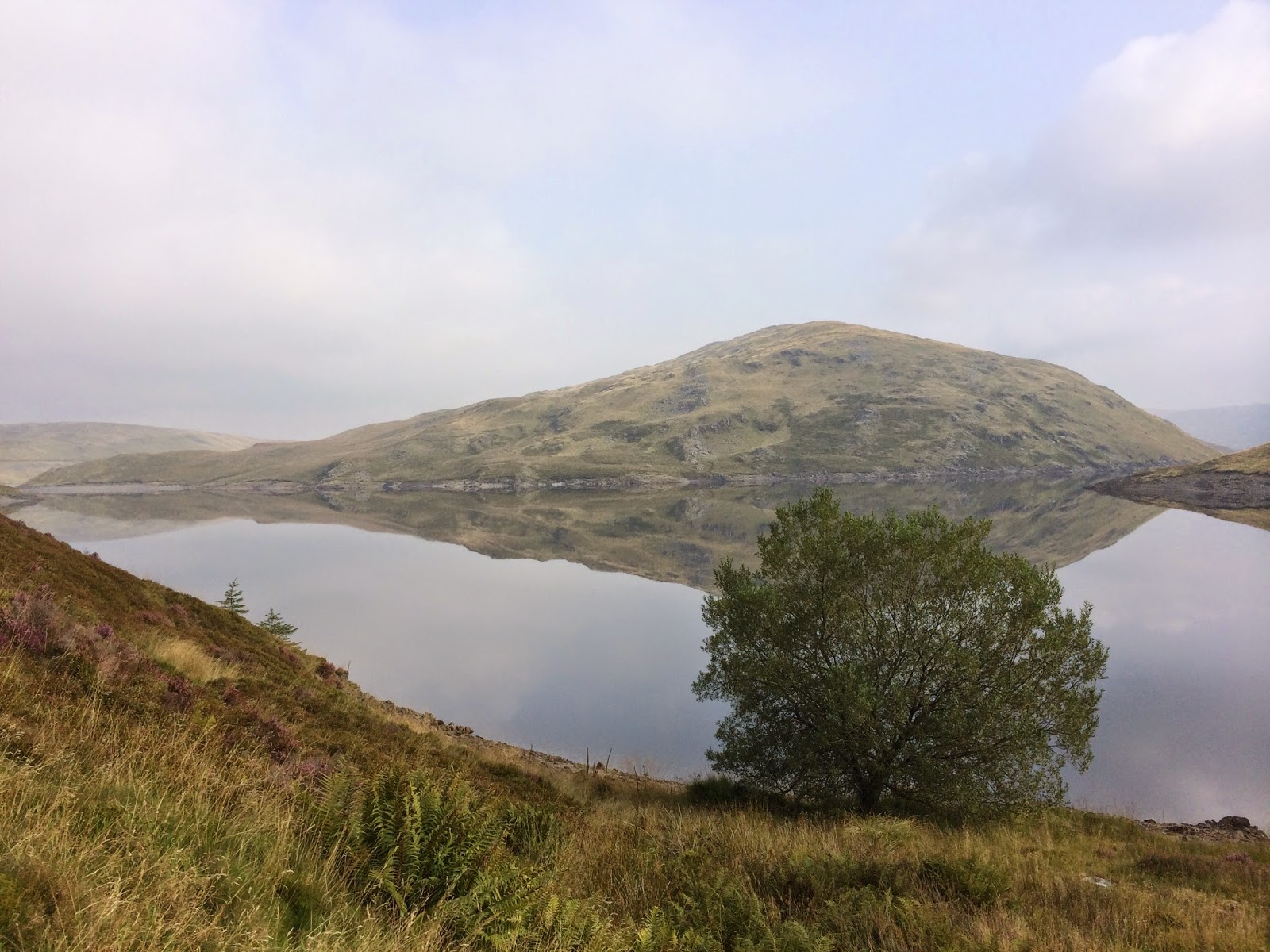 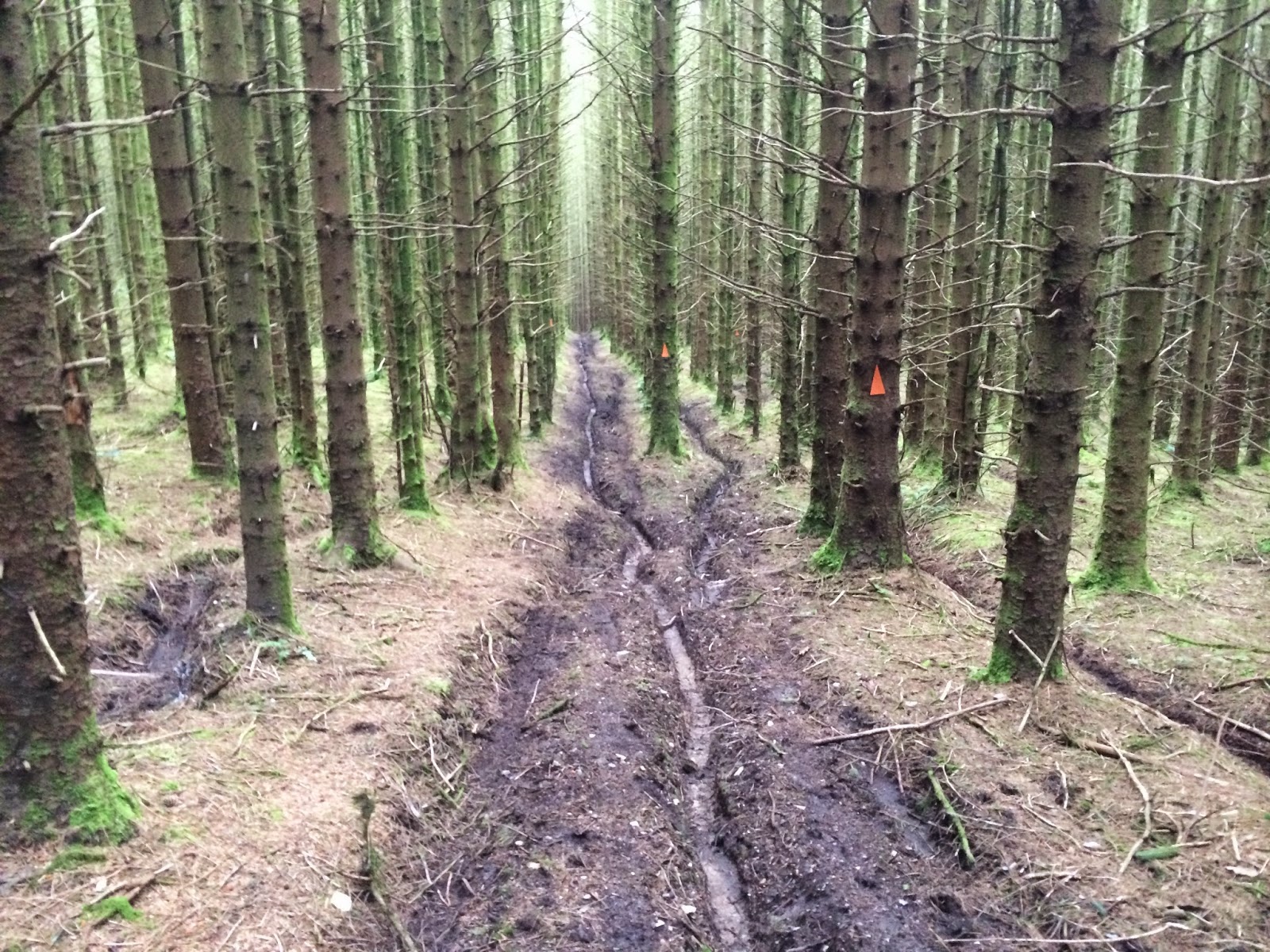 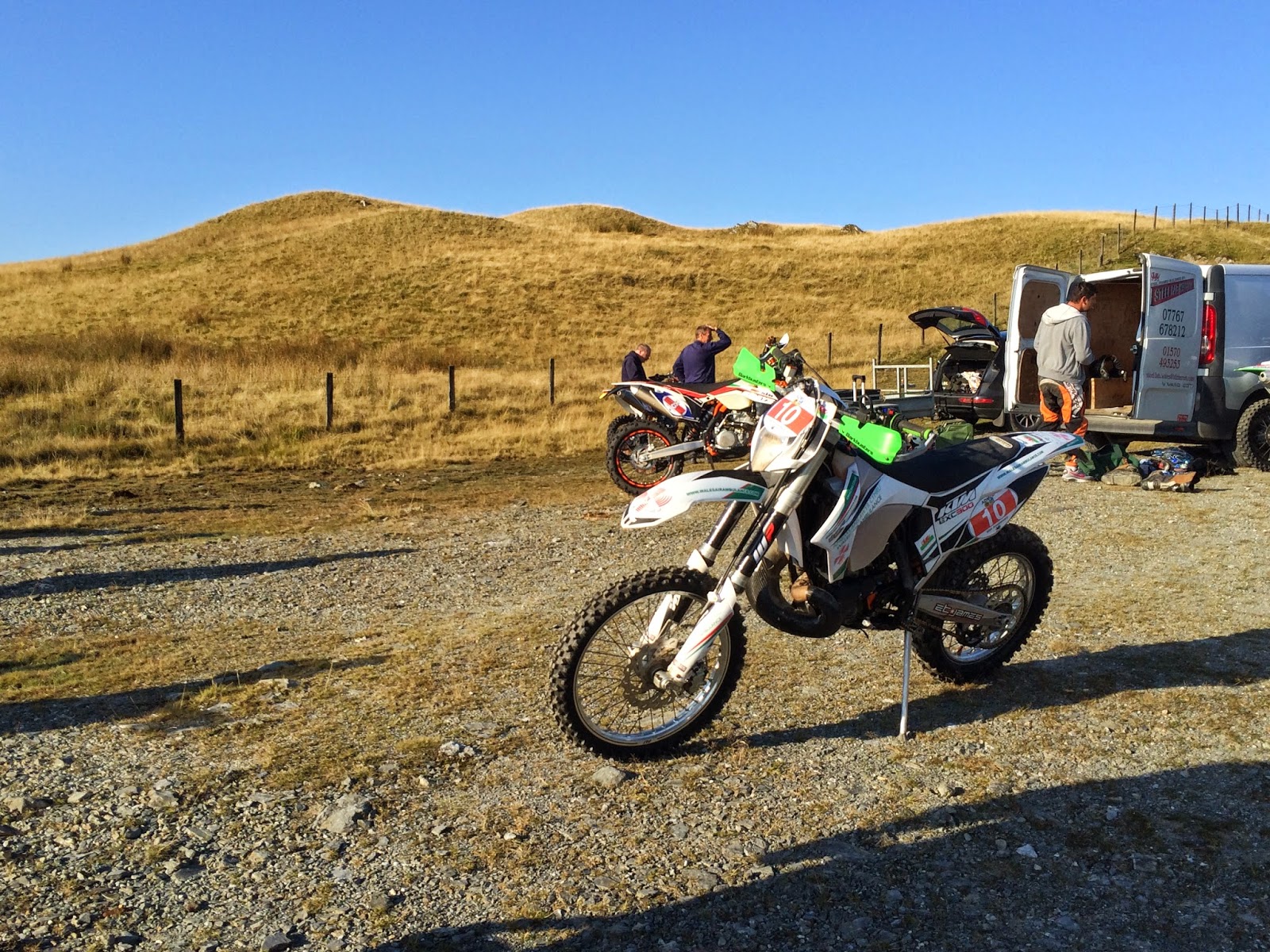 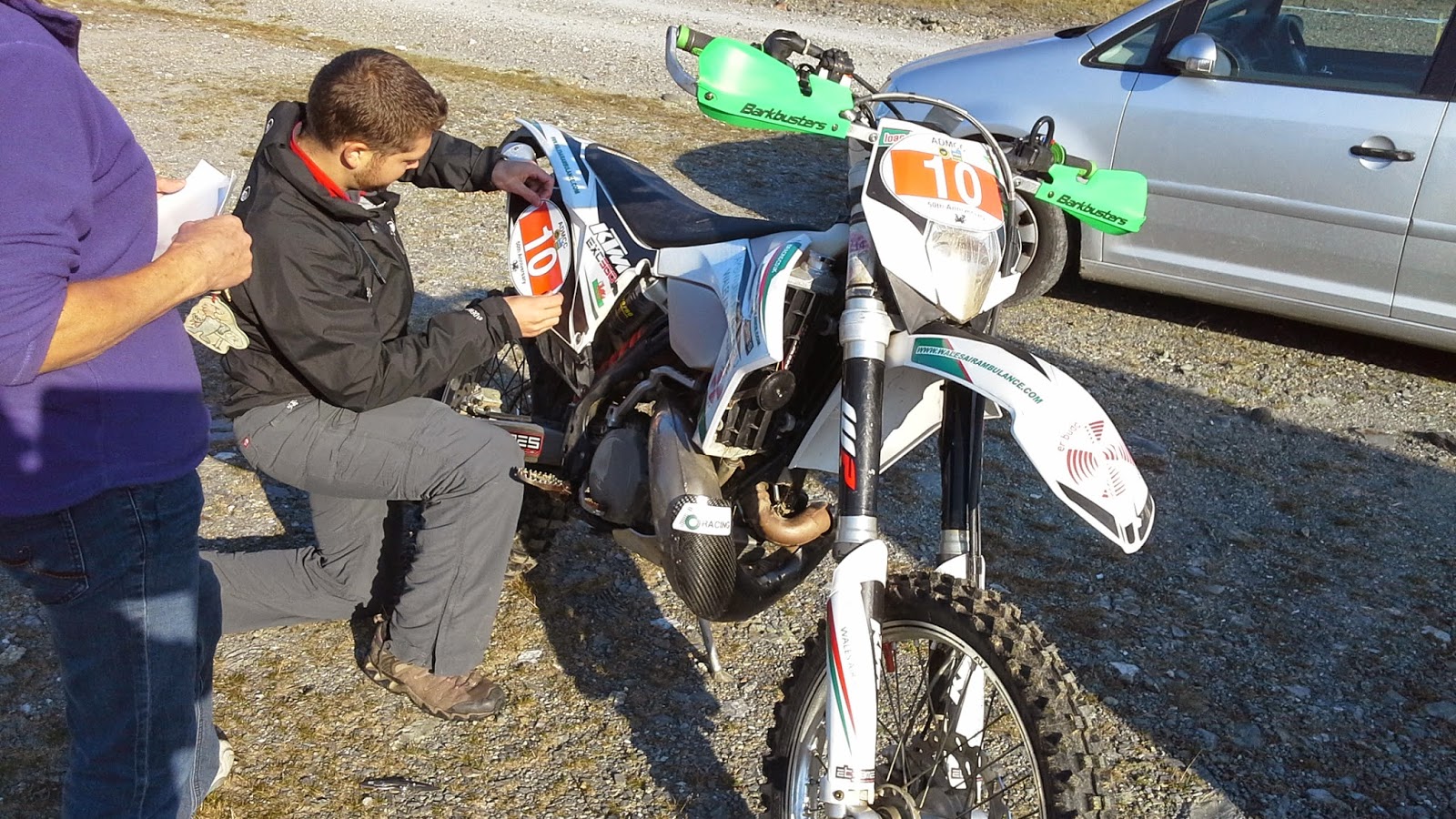 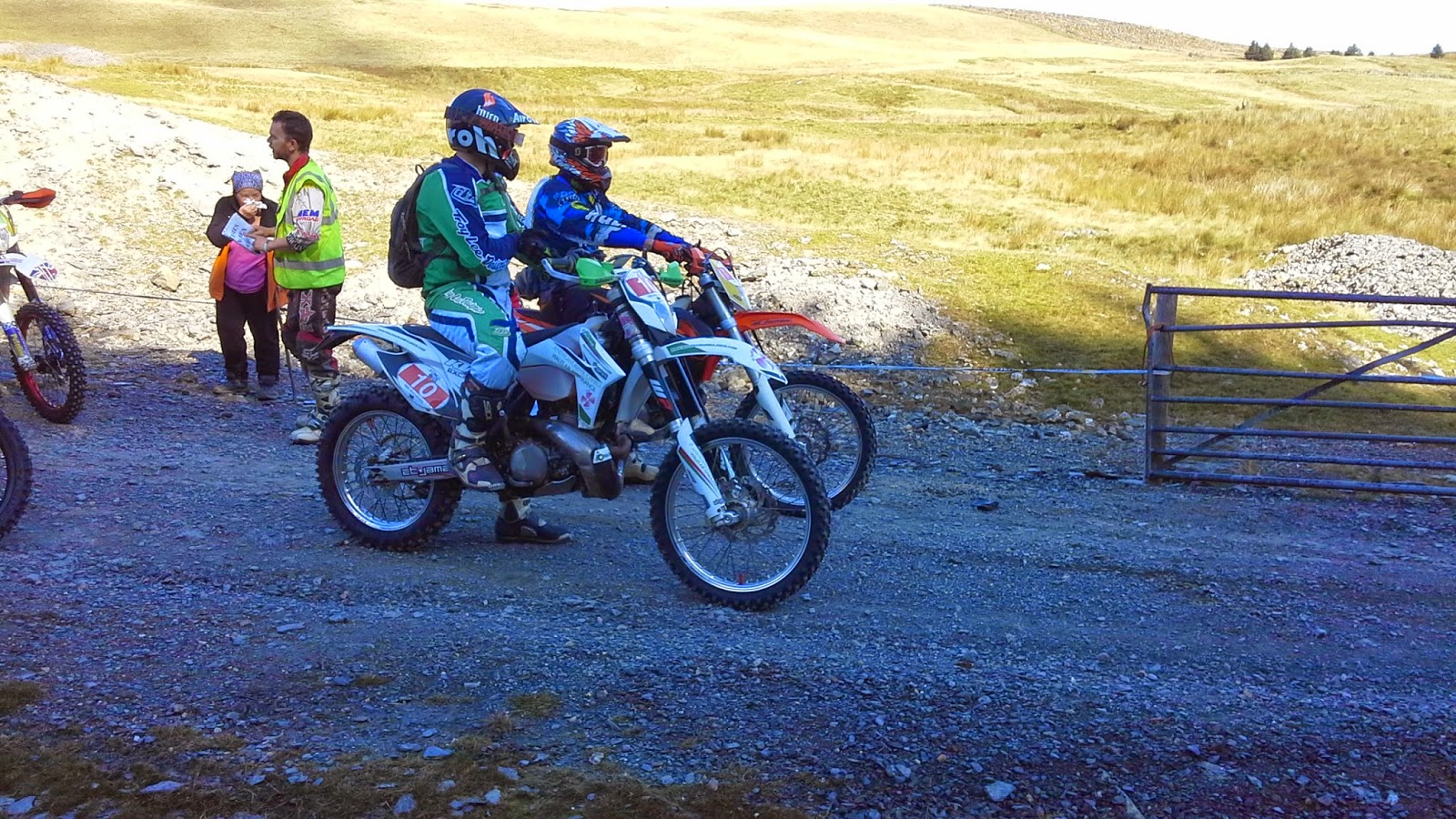 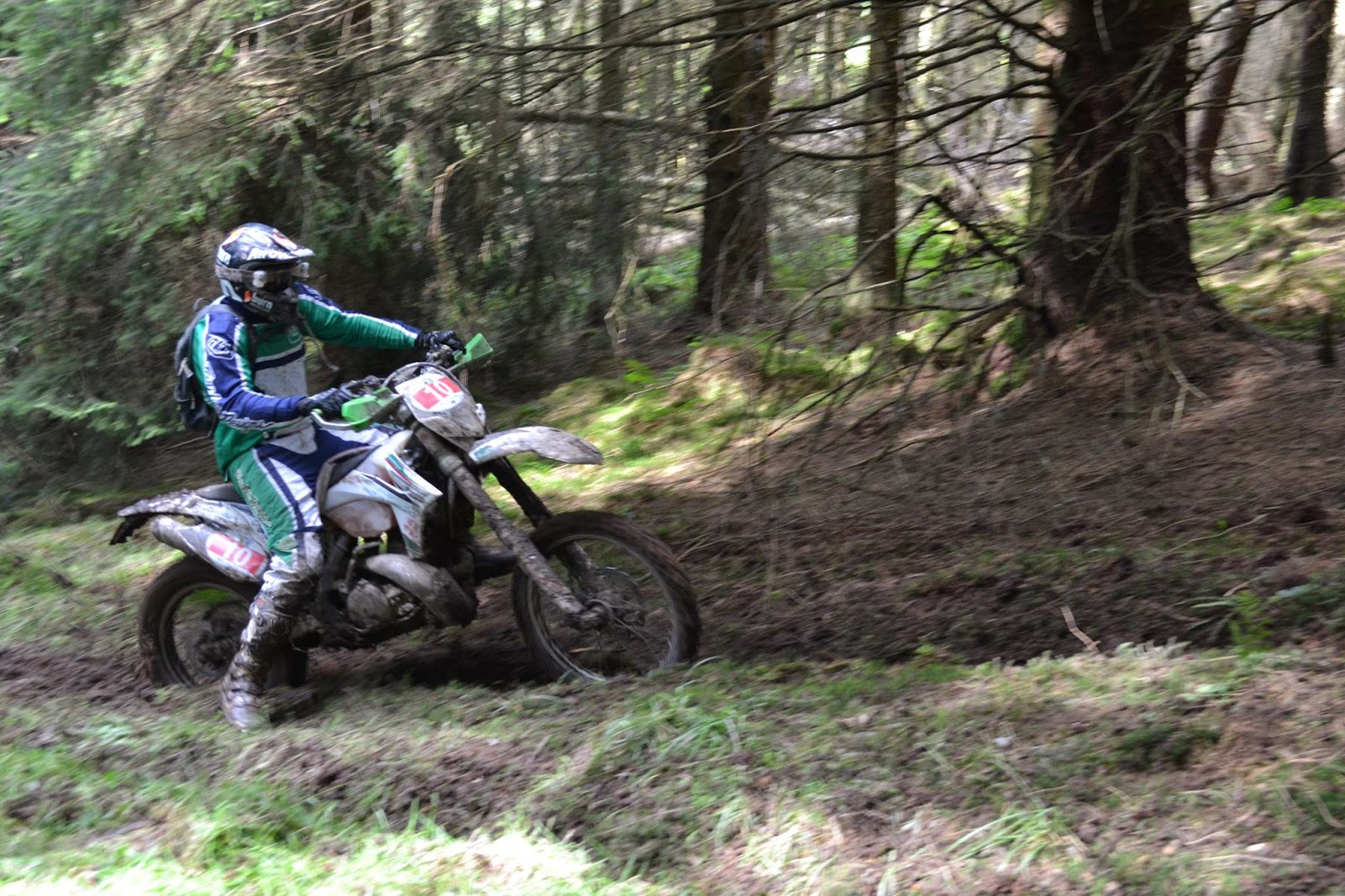 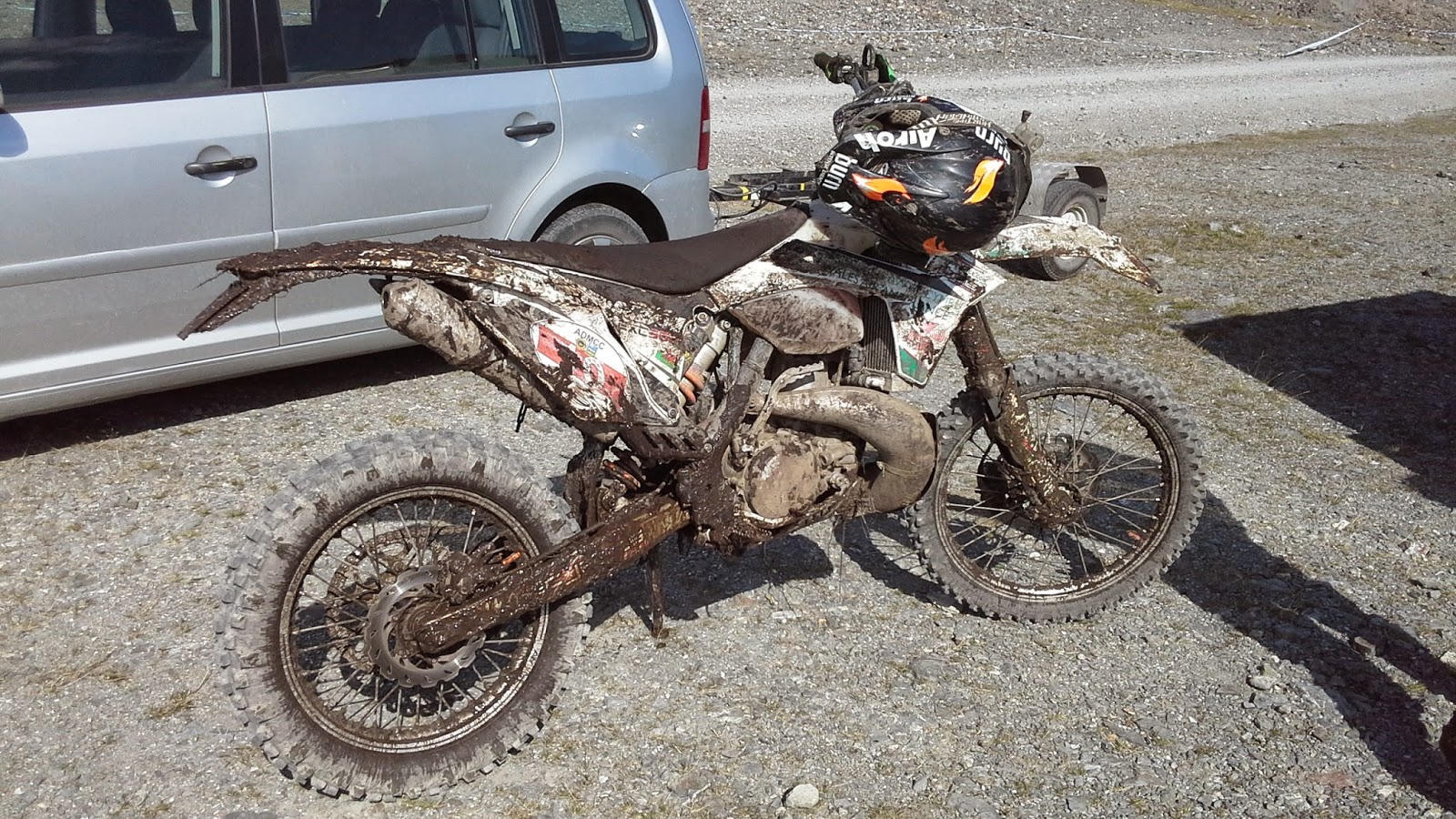 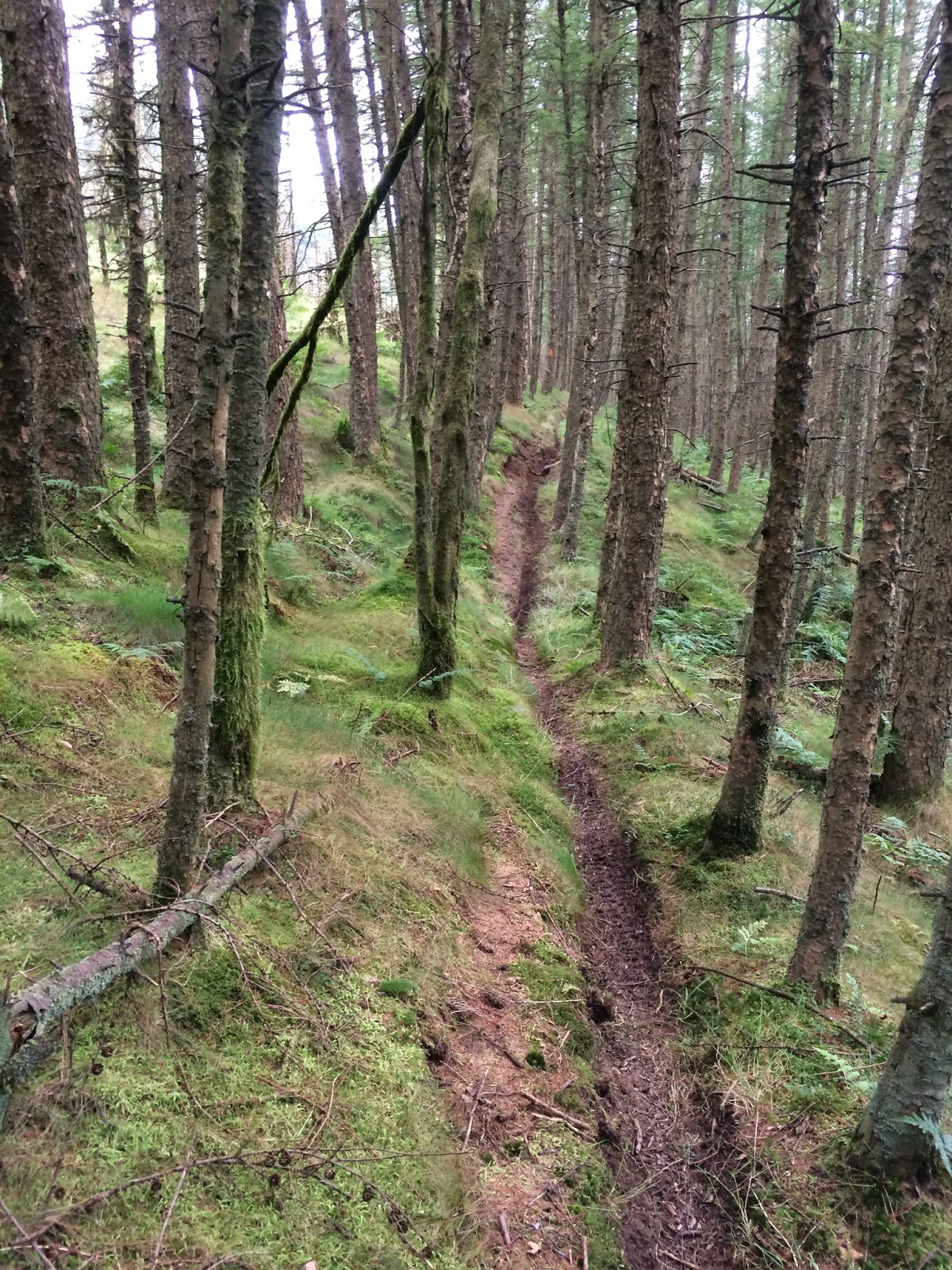 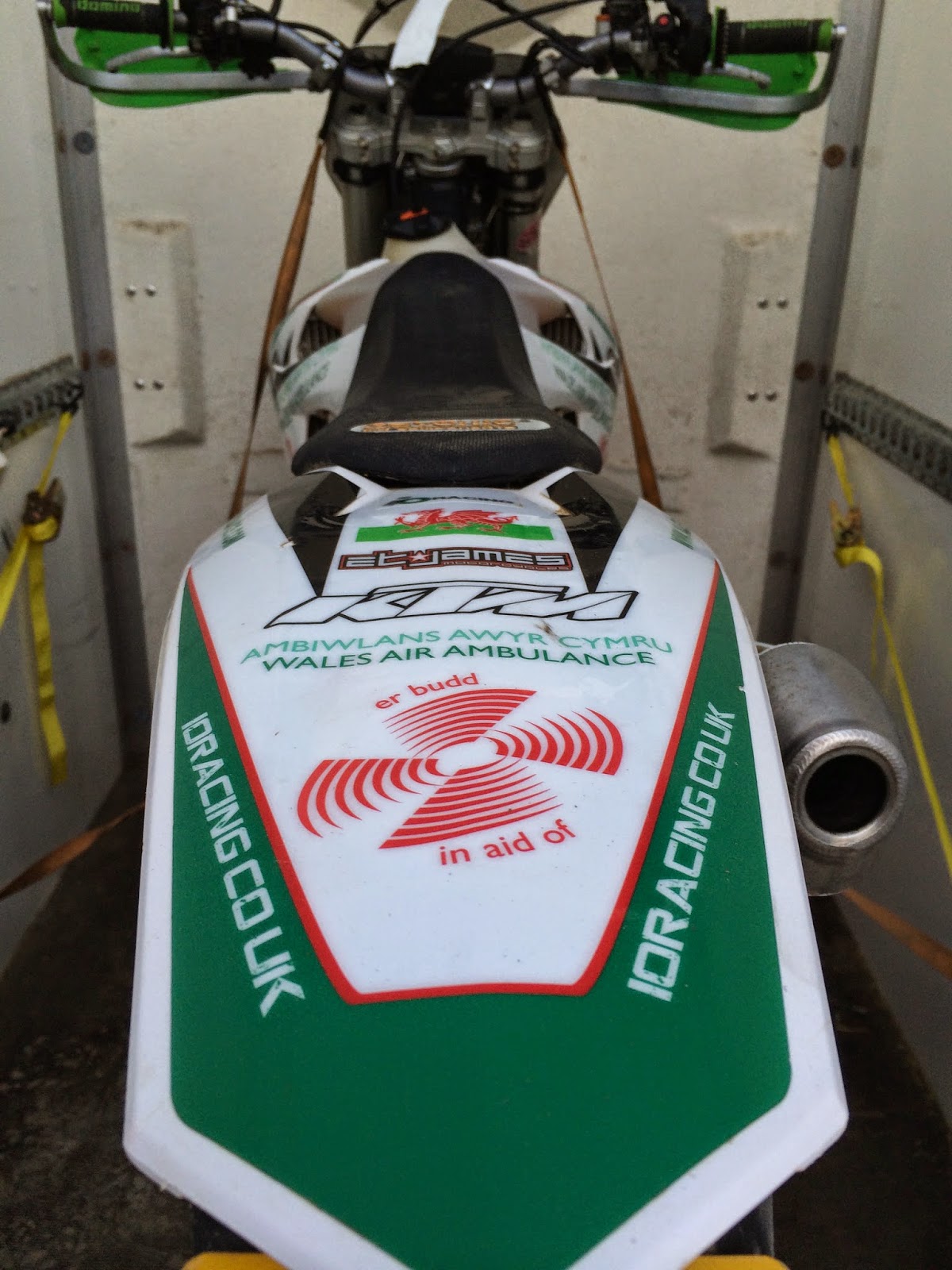