Round one of the 2014 All Terrain Rally Challenge and what a way to start the season! Glorious sunshine and a well organised event, so firstly, many thanks to Dyfed Dirt Bike Club. There was a really healthy entry for the Brechfa Rally this year including sidecars, which came to a total of around 180 riders!

I was up by 5am on Sunday morning, got as much breakfast down as I could manage (always one of the worst things, I find) and then off we went to Brechfa Forest in Carmarthenshire. We parked up, got some coffee and I went to sign on with the friendly Dyfed bunch. While I was there I got my times and filled out my timecard.

Everyone's different, but I like to get things done early, so that if I have a problem in scrutineering or notice anything wrong with the bike, I will at least have some time to work on it before the race starts. I went straight back to the car, unloaded the bike and took it into scrutineering. I was quickly given the sticker of approval and off I went to relax and mingle with the regulars and the RallyMoto crew. It was good to see everyone as usual!

The first riders were away at 10am in groups of three, with the fastest graded starting first. There were 4 laps for riders graded 1-7 and 3 laps for those graded 8-10. I was number 30 for the day and set off at 10:09am, very excited to put the new bike through its paces.

The first lap was a sighting lap, the idea being that you use it to familiarise yourself with the special test. Last year I started off riding the sighting laps quite slowly and trying to remember every section, but it's just not possible. My approach has 'evolved' if you like, over the last year to riding the sighting lap at a fast pace to get warmed up and properly focused and to get a good feeling for the level of grip. With regards to remembering the layout, what I now tend to do is try to remember the difficult or dangerous sections. The test was fast, with a lot of twisting fire road which was incredibly slippery and polished in places and really rough in others. There was a nice technical section linking the fire roads which had some long ruts and sticky mud.

Now then, onto the timed special tests. My first timed lap felt good, even though I mis-timed my braking on a fast fire road section which dropped into the downhill trail and shot off line into the bank. I knew it was there to use if I was coming in too fast, but it wasn't where I wanted to be! There were a couple of riders who had gone off the edge of the fire road in places, but I could see they both had plenty of assistance so I kept moving to avoid blocking the track. The second test was going well until I got cramp in my left fore-arm dropping onto the fire road after the downhill technical section and stalled the bike! Luckily I now have an electric start and I only lost about 10 seconds. I also slowed down a little further on to check if riders were OK after becoming separated from their bikes, but not enough to make any real difference to my time. The third test went well but my arms were starting to feel very tired and my lack of bike fitness was starting to show. I took it steady and made sure I stayed on and put in a good time so that I didn't ruin a good day by crashing out.

All in all I feel like I rode well bearing in mind this was my first proper ride on the Wales Air Ambulance EXC, certainly the first time I'd ridden it aggressively. I have to say it performed well, I was really pleased with how it handled, particularly in the corners. The only thing I might look into is the gearing, it's geared for enduro at the moment (a larger rear sprocket meaning higher torque and lower top speed), so although it was fine yesterday, I might be pushing the engine too hard on some of the faster events like the up-coming second round at the Pikes Peak Baja Rally.

I'd like to thank everyone who donated to Wales Air Ambulance throughout the day, the bucket definitely has some more weight in it! Hopefully as more people get to know my bike and know more about what I'm doing, they will be encouraged to do the same.

Thanks also to Gary Jones the photographer who was out on the trail taking photos - especially for timing my photo so that you can't really tell it was a very poorly executed jump! :)

I'm excited to see the results now and I'm hopeful of a good result. Needless to say I will be back next year for some more rallying at Brechfa. 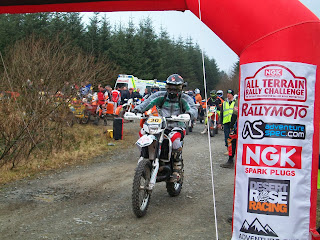 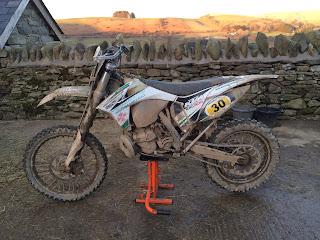